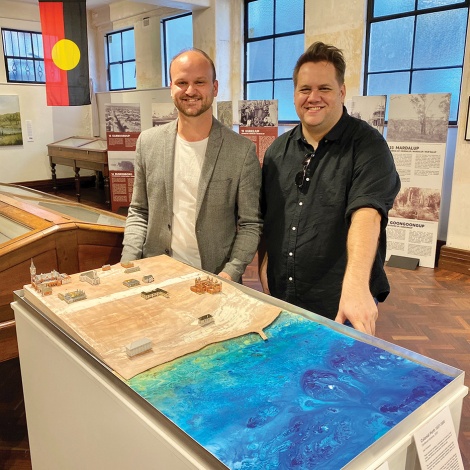 ELIZABETH QUAY was once known as Gumap, Mount Eliza was Kata Moor, and Claisebrook Cove was a freshwater stream called Goon’goong’up, and so narrow you could step over it.

A new exhibition Gnarla Boodja Mili Mili (Our Country on Paper) at the Museum of Perth tells the stories behind 31 Noongar names for places around Perth.

It draws on research done over the past five years by the Aboriginal history unit at WA’s cultural industries department, which partnered up with the museum to deliver the exhibition.

The research produced an online map launched in September 2019, and now the exhibition takes them into the physical realm and accompanies the stories with early portraits of Noongar people, paintings, early translation dictionaries, artistic impressions of how the land might’ve looked, a model of the colony’s early days, and with a soundtrack of kids from Bibra Lake primary school pronouncing the Noongar names.

“At the time of the colonists’ arrival in 1829, Indigenous languages and knowledge were essential for the survival of the colony,” he says.

“Aboriginal place names tended to describe the usefulness or importance of that location, whether it was a good place to cross a river, to hunt, or to access clean drinking water. 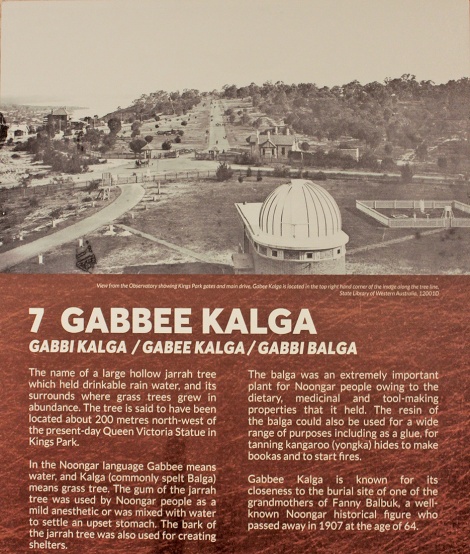 The view from the observatory of Gabbee Kalga. Photo from the State Library WA, 12002d.

“For example, ‘Gabbee Kalga’ was the name of a large hollow jarrah tree which held drinkable rainwater, and its surrounds where grass trees grew in abundance. The tree is said to have been located about 200 metres north-west of the Queen Victoria Statue in Kings Park. In Noongar language Gabee means water and Kalga (commonly spelt Balga) means grass tree.”

Another is Kooyamalyup, one of the names given for the camping ground at the foot of Kata Moor/Mount Eliza, that means place of the frog camp. The name corresponds to a diary entry from early colonist George Fletcher Moore who wrote of spending an afternoon there with a Noongar boy who showed him how to dig up the ‘kooya’, frogs, prized for their tasty eggs.

Some places had multiple names, and often the Noongar names don’t correspond to modern sites as the land’s been changed so much. “Goodinup” describes the springs that used to flow into a large pool of water at the west end of

the Perth Foreshore. It was a favoured campground for the Whadjuk leader and peacemaker Yellagonga. The modern street name is “Spring Street”.

He says understanding the original place names gives a greater connection to history and culture, and adds “I hope our exhibition helps to rekindle this flame and encourages the people of Perth to learn more about the history of their city”.

The exhibition’s on at the Museum of Perth until the end of the year (8-10 The Esplanade, Monday to Saturday, 10am to 4pm), then the panels will be available to go on tour.