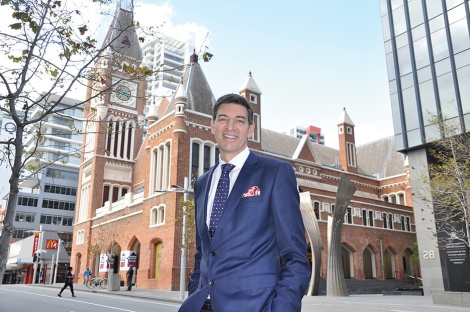 Basil Zempilas at Perth town hall. His grandfather opened the Town Hall Fruit Palace right by there in 1925.

BASIL ZEMPILAS has pledged to hold monthly town hall meetings for residents and ratepayers to quiz council if he’s elected, saying the historic building should be used more for community events.

“This would be a more informal opportunity for the public to quiz myself and the council about our decisions, offer up their ideas and tell us about their City and their expectations they have of us,” Mr Zempilas said.

Perth council meetings are nine floors up past a manned desk, and they’re pretty formal and stuffy affairs, opening with a prayer and strict rules limiting speakers.

It’s only in the past few years people were allowed to speak at public question time, but take-up’s still been low compared to the pre-Covid packed houses at Vincent, the question time battle-royale at Bayswater, or the impressively long public filibuster sessions at Stirling.

Mr Zempilas was in hot water with the WA Electoral Commission this week, which told him any future columns in The West about City of Perth business would need an authorisation and might need to be declared as a campaign contribution. Mr Zempilas argues his column is “his job” and he was doing it well before running for mayor, but says he’ll abide by the warning.

Mr Reynolds says he’d like to give the $150,000 saving across the three-year term “back to the city with the hope we can set up a youth board to create new leaders for our future”.

He also decline a mayoral car: “I have a car, there is no need for the ratepayers of the City of Perth to fund another one.” Meanwhile candidate Tim Schwass says he will take a mayoral van, which he’ll give to the Alliance to End Homelessness for homeless people in need of transport.

ALL lord mayoral candidates are talking about homelessness, but this week Mark Gibson announced he’d already sealed a deal with a backpackers’ hostel in East Perth to use it as transitional accommodation for homeless people.

He announced it at a Shelter WA candidates’ session and says if it all goes well it could house 50 people by the end of October, and if elected lord mayor he’ll lobby the state for 15,000 new homes for the 14,000 people on the public housing waiting list and the 1,000 sleeping rough.

Di Bain told the Shelter WA session she planned on a “By-Name” list so the council can learn the names and stories of people on the streets to better target services and get results, she also wants accommodation to be found in council buildings or backpackers’, and said a free shuttle bus is needed to get people on the street to the service providers.

Tim Schwass said the Moore Street homeless services ‘hub’, currently just a carpark, should be turned into an actual building open 24/7 for the Alliance to End Homelessness to operate out of.

HUGE money is being spent as candidates’ declarations of their campaigning gifts roll in.

So far Di Bain has made the lion’s share of election gift declarations, at about $60,000 in cash donations and several waived costs for event hire, printing and campaigning. The biggest was $36,800 worth of donated PR services from long-time Labor campaigner Daniel Smith.

Brodie McCulloch declared a $7,500 in-kind contribution from the company he founded Spacecubed, for using office space during the campaign. The other lord mayoral candidates have stated they’ll eschew donations.

Sandy Anghie said the city needs an independent lord mayor so she’s self funded her campaign, not sought donations or endorsements, and declared she and her husband have “no property interests or dealings in the City of Perth” outside of their offices.

“Conflicts of interest are problematic,” her statement read. “Like property interests, all donations become an “interest” which could be perceived to affect decision making… for this reason it is important to have a lord mayor free from conflicts”.

Mark Gibson says he’s running “a grassroots, self-funded campaign on the smell of an oily rag, as a city resident wanting to make a difference to his community… if elected, I will owe favours to no one.” Among the big field of council candidates who have nominated to fill all the vacant positions, Taofeng (Leah) Xia has declared about $14,000 in gifts from 18 individuals and companies, including Sincerity Group property developers and the Jiangsu United Association. Brent Fleeton has declared just under $10,000 in cash donations from individuals.