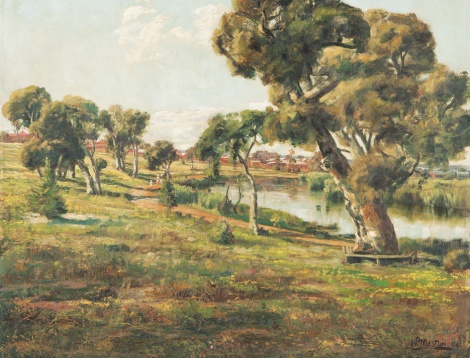 A HISTORIC painting of Hyde Park rarely seen in public has changed hands at auction, but the new owner remains a mystery.

For a few years now garden historian John Viska has been tracing the 1904 painting by Walter Paterson Meston titled Hyde Park, as it provides a rare vision of the park in its early years.

“There are very few representations of Hyde Park in its early days… this has high cultural significance,” Mr Viska says.

The identity of previous recent owners were also unknown.

It changed hands at auction three years and when Mr Viska saw it was coming up again he contacted Vincent council.

He hoped they might be able to acquire it for the Vincent art collection, but the painting was expected to fetch $15,000 to $18,000 and he was told there was no spare cash in council coffers.

We’ve asked the auctioneer GFL Fine Art if they might put us in touch with the buyer but had no luck.

Mr Viska is co-running a walking tour through Hyde Park with fellow local park enthusiast Rodney O’Brien this Saturday December 12, to discuss the lost fountain and the park’s botanical history.

It’s free and all are welcome, meet at 10am near the Lake Street entrance.

Meston, who was born in Scotland, moved first to New Zealand and then Western Australia in 1897 where he set up a sign painting business in Kalgoorlie.

He then moved to Perth where he lived close by Hyde Park and had an affinity for plants, being a member of the Grand United Order of Free Gardeners which used to meet at Leederville’s Oddfellows Hall on Oxford Street.

He held watercolour painting lessons though he was largely self-taught, and is represented in the state’s official art collection.