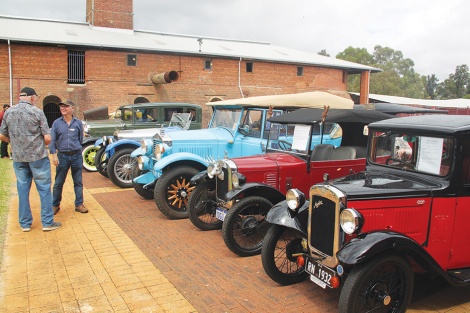 • The Veteran Car Club of WA were just one of the history clubs that made the open day a great success.

THE Friends of Maylands Brickworks funded, planned and organised the open day which was a great success with 320 people attending the three-hour event.

THE Friends of Maylands Brickworks funded, planned and organised the open day which was a great success with 320 people attending the three-hour event.

Giving the community an opportunity to see inside this impressive Heritage Listed building and for the FOMB to discuss the potential moving forward was rewarding.

A visitor centre was also set up in the Gatehouse with displays to help imagine a possible future for the site.

The FOMB wanted to create the feeling and character of the era when the Brickworks was in operation.

We invited the community groups to join us and were delighted to share the day with them, including Veteran Car Club of WA Inc, Bus Preservation Society of Western Australia, WA Police Historical Society Inc, and Maylands Historical and Peninsula Association.

The stories they shared, the history and background of all the vehicles and dedication by each member was inspiring.

Community groups supporting each other is important.

The FOMB were intrigued by wonderful stories from past employees who worked at the Brickworks or childhood memories of playing around the clay pits, as well as senior visitors who had bumped into fellow students they had not seen since primary school.

The excitement on their faces when seeing the vintage cars and talking to the owners – they couldn’t wait to share the memories on board the historic buses, pulling the cord to let the driver know they wanted to get off and the conductors who walked down the aisle turning the handle on the ticket machine.

The conductor or driver hopping off to help hang the prams on the back of the bus.

It was a great pleasure to have the mayor Dan Bull, MP Lisa Baker, Justin Iemma and Emma Pringle come along and show encouragement for the Friends of Maylands Brickworks’ vision.

It was fantastic to see so many young people and older members of the community coming together and enjoying the day was wonderful.