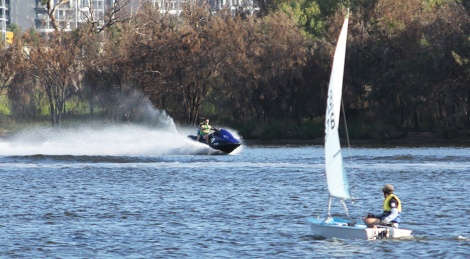 • A sneaky jetski ignoring the ban on going past Windan Bridge.

PEOPLE power has scuttled plans to allow jetskis and waterskiers into more of the Swan River.

The Department of Transport had flagged a two-year trial extension of the Belmont waterski area upstream by 100m and downstream by 145m ‚Äì into waters used by the Maylands Yacht Club.

A second prong of the plan would’ve let “personal watercraft” (or jetskis) further upstream of the river, whereas they’re currently banned from going any further than Windan Bridge.

Mr Mather said the review “attracted a high level of interest and comment from a diverse range of riverpark users with more than half identifying as paddle craft users and around one quarter being recreational boat owners”.

Maylands Yacht Club commodore Mimi Secco said sailors, radio controlled sailors and kayakers from around the club were thankful the department listened to the community.

“I would encourage the DoT to enhance their policing of the speed limits, particularly on Sundays when club racing and sail training is held.

“Most boaties do the right thing, but invariably, we see the few who breach the speed limit and generate excessive wash – not pleasant for the sailors and kayakers, or the health of the river bank.”

The Friends of Maylands Samphires feared jetskis would impact the fragile foreshore they are restoring and disrupt bird breeding sites.

Member Jo Bower tells us: “This is a good outcome for the vulnerable ecology of the riverbanks along the Swan River and for the many people visiting the river for quiet recreation.

“The FoMS meets in Maylands on Tuesday mornings from 7am and we always see rowers, kayakers, and people walking, cycling and fishing along the river.

“We always see waterbirds and occasionally dolphins. This stretch of river allows contact with nature and a space for quiet recreation in our busy lives.”

The DoT runs river-use reviews every four or five years.