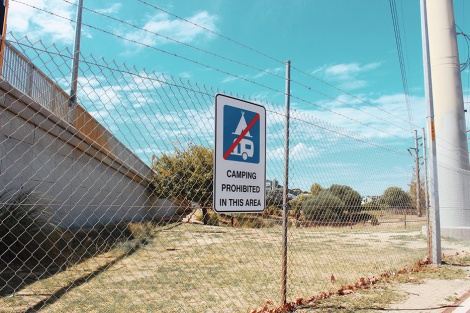 A sign warns against camping at the Lord Street overpass. Photo by Kelly Warden.

A PERTH hotel housing campers from Fremantle’s dismantled Tent City, was forced to kick out its 15 remaining homeless clients on Wednesday, with a $40,000 bill no one will pay.

Perth City Apartment Hotel is looking to the Department of Communities to cough up the cash, but Communities has denied any involvement in booking people in.

In a media statement released on the morning of the evictions, Communities was adamant the bookings were brokered by homeless advocate, Jesse Noakes.

“Communities did not place any individuals in the Perth City Apartment Hotel,” it read.

Mr Noakes said he’s only responsible for two individuals, while the rest fell through the cracks whilst Tent City was being dismantled.

He said people had found an alternative means of getting to the hotel, and it’s likely they knew to go there because it was already accommodating people from East Perth’s Tent City.

One of the hotel’s lodgers, Steven Camilleri, said when Fremantle’s camp was being dismantled, he’d given his details to “someone with a clipboard,” and was told he’d get accommodation if he boarded a bus in the afternoon.

Steven was photographed by one of the major news outlets trying to board a bus, with his trolley in-tow, but was turned away by an official because he had too much luggage.

“They left me for dead,” he said, not wanting to part ways with his worldly possessions from being on the streets for 25 years.

Mr Camilleri said he’s offered to pay $200 a week to keep staying at the hotel, if it means he doesn’t have to go back out onto the streets.

Natalie Garlett had been sleeping in her car for six months with her pregnant daughter and school-age son.

She said she’d spent three weeks sleeping in her car at Freo Tent City but missed out on getting her name on “the list,” when the Department of Communities came around.

Ms Garlett knew there were others from Tent City being accommodated at Perth City Apartment Hotel, so that’s why she went there.

“We are really grateful for the owners of this hotel and what they have done for us … but now we’re basically about to get evicted again, just like we were from our home last year”.

However, the day the eviction came, a private donor from the eastern states offered to pay for Ms Garlett and her family to stay in the hotel an extra week.

And, for those being kicked out, Communities said they offered accommodation at an alternative provider, “should members of this group agree to engage with outreach workers”.

A Department spokesperson said four people were collected and taken to new accommodation on the morning of the evictions.

Some of those who were kicked out without accommodation options went to the Homeless Election Debate on Adelaide Terrace.

There were rumours others went back to the site of East Perth’s Tent City, but the Voice checked and found no one there.

Only a “No Camping” sign to take its place.

Hotel owner Eddie Kamil, who has been accommodating clients from a range of homeless service providers – including Communities – for years, is still $37,000 out of pocket.

He said he was under the impression the rooms would be government funded, because he was already accommodating people from East Perth’s Tent City, whose rooms were being paid for by government.

“We provided five rooms initially for about a dozen guests from December 24, and early in the New Year several more rooms were booked for the remaining people at that camp following the fires there,” he said.

“Initially Wungening and Uniting WA funded these rooms… and later we were told Communities took over payment”.

Mr Kamil said the people who arrived after Pioneer Park’s camp was dismantled, all said they’d been staying there.

“And Googling their names revealed most had been in media coverage which confirmed that,” he said.

“We knew that the government had promised accommodation for everyone from the Tent City at Fremantle, and had already had bookings for other homeless people for the department from the other camp”.

Mr Kamil said he’s been receiving mixed messages from the Department since the latest group moved in.

“Several times the government have called to say they’ll pay for all the bookings, and then changed their minds hours later,” he said.