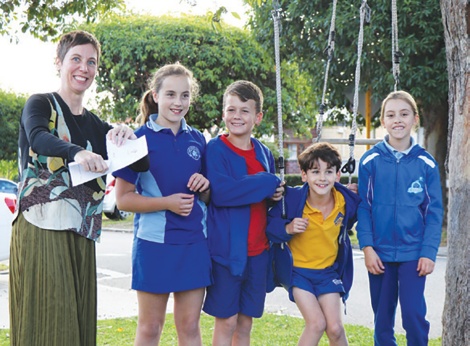 Vincent mayor Emma Cole when her council ripped up the rules preventing kids having a swing on their front verge.

TREE swings will soon be permitted on Bayswater verges, the change coming shortly after a stickler for the rules dobbed in several fun-lovers over the Christmas holidays.

Tree swings became more popular during Covid when playgrounds were closed, but are technically against the rules of what can go on a “thoroughfare” such as the verge.

Bayswater council started the lengthy process of loosening the rule last year, advertising the change in September. But in December, before the law could go through, someone went around the neighbourhood reporting a number illegal swings.

The Voice heard of at least seven households who had reluctant rangers turn up to their doorstep to point out they’d become law-breakers, though in at least some cases the swings were given a stay while the law changed.

Under the new rules movable play equipment, small swings and rope ladders “that do not damage the street tree” are permitted on the verge directly outside your home, as long it’s not crowding out pedestrians and isn’t within six metres of an intersection. The final details of what’ll be allowed without a permit are now being hashed out.

But it looks like Bayswater won’t go as far as Vincent, which let just about anything on a verge since 2018 after its own spate of Christmas time verge complaints, and the draft says Baysie folk can’t put up a tree house or cubby house.

But it’s less strict than Subiaco. While that council eased up

on enforcement during the playground lockdown era last year, rangers were soon back out enforcing the law. Subi mayor Penny Taylor’s asked for a review of the council’s anti-swing policy.