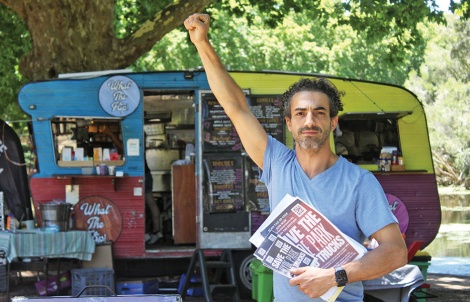 Islam Bouyahia, owner of What the Flip! food van. Photo by David Bell

HYDE PARK’S food vans would be turfed out and Veggie Mama given exclusive rights to serve food in the park under a plan being pondered by Vincent council.

Vincent staff have recommended councillors vote to lease the west end storage shed to Veggie Mama for $30,000 a year, at the lowest end of the estimated $30,000 to $60,000 market value.

Veggie Mama would also get a nine-month rent free period, council pays for water and power, an “exclusivity clause” would mean the three regular food trucks would have to leave, and the public purse would pay $55,000 to upgrade the west end storage shed to get it ready for Veggie Mama to install their kitchen.

That’s despite council’s initial plan in May stating “the cost of upgrades will be the responsibility of the successful respondent”.The lease terms also allow them to apply to the state liquor department for occasional liquor licences for events.

Veggie Mama was chosen out of five tenderers and deemed by council staff to be the best deal.

Food van supporters lined up to speak at this week’s council briefing to oppose the plan. Nearby resident Stephen Graves said “the terms of that lease seem extraordinarily generous that’s nine months free rental. I’ve never heard of this.”

Islam Bouyahia runs What the Flip food van and said he’d spent years building up a customer base and had made many friends in the community.

“I’m not against any competitors,” he said. “I’m against unfair competition,” taking issue with the exclusivity clause and the generous bonuses that have now appeared in the final lease terms.

He says the food van operates on thin margins and having to leave the park would be the end of his business. A French migrant born in Algeria, he says he has no other support here and predicts he’ll be homeless within months if he loses his loyal customers at Hyde Park.

“As an orphan, my community of City of Vincent has adopted me and given me work – given me the only family I have,” he told the Voice.

“It is very unfair that we are asked to move out for a biased tender that has been modified.”

He said he would have applied for the tender if he knew the council would pay for building upgrades and give so much free rent.

“People are now shocked to read that tenancy agreement – the whole thing feels like it twisted the fabric of reality.”

Councillors raised a few questions at this week’s council briefing ahead of their upcoming vote on December 14.

Councillor Ross Ioppolo questioned whether it was a good look for council to be favouring one business to the detriment of others.

The Veggie Mama deal is financially beneficial to the council even with all the freebies: The three food vans pay $800 a year for a permit to operate there, compared to Veggie Mama’s proposed $30,000. He also asked whether they ought consult Whadjuk people on the proposal given the site’s significance.

Mayor Emma Cole foreshadowed she’d move to shorten the rent-free period at the upcoming meeting, suggesting it should only apply until the council’s renovations were done.