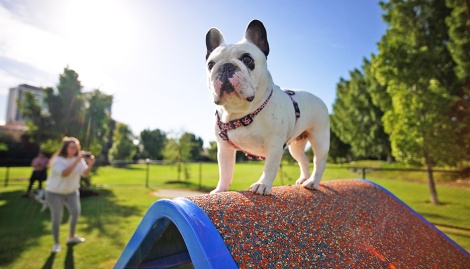 INNER city dog owners are begging for a new spot to walk their dogs off-leash, but the scant number of CBD parks has them competing with other park users for a sliver of space.

Perth city council recently consulted the public on a plan to build a new fenced off-leash dog area and dog owners were near-unanimous in support.

Currently there’s just one small fenced, off-leash area at East Perth’s Ozone Park, and only a couple of other unfenced parks where they’re allowed off leash.

But after examining 50 open spaces in the Perth council domain, there’s almost no other suitable dog spots.

The council doesn’t want to stick dog parks in sensitive spots like Aboriginal heritage sites, parks with historical significance, or areas with wildlife and native vegetation.

That ruled out places like Heirisson Island, Wellington Square, or Queens Garden, and only three parks were deemed suitable: JH Abrahams Park in Crawley, a small patch of sloped ground named “Railway Reserve” in Claisebrook, or making the Ozone Reserve area a bit bigger.

Given that too many residents opposed fencing off part of JH Abrahams Reserve, council staff recommended expanding Ozone Reserve and installing fencing at Railway Reserve. Councillors vote to decide whether to go ahead with the $140,000 plan at the December 21 meeting.