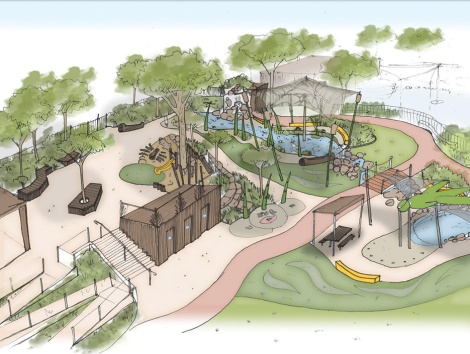 How the Maylands Waterlands will look, eventually. Concept design by Josh Byrne & Associates.

Construction started mid-2021 and Bayswater council was originally hoping contractors would finish the first stage of rejuvenation works in time for a summer 2021 reopening.

The December due date’s now slipped by and the council’s announced siteworks and the off-site construction of artwork and waterplay gear are still underway.

If all goes well construction and landscaping will be done by mid-March for the lengthy water testing process to start in time for an Easter holiday reopening.

The $4 million first stage will install new splashpads, but the deeper pools won’t be returned until the yet-to-be funded and still unscheduled stage 2.

Bayswater recently had to take out a hefty loan of $1.5m to continue funding the first stage of Waterlands works. When approving the budget in mid-2021 they’d hoped

to find external funding or a grant but nothing eventuated. When December 2021 rolled around they approved a $1.5m borrowing to keep up with paying contractor invoices.

Bayswater’s had a long history of staying out of debt but mounting pressures to borrow included their many declining assets and community demand for renewed facilities, and very little extra money going around given the meagre increase in their rateable base recently.

At that same December meeting they also voted to borrow $1.7m for the Bayswater Waves refurbishment and $775,000 for the Morley Sport and Recreation Centre.