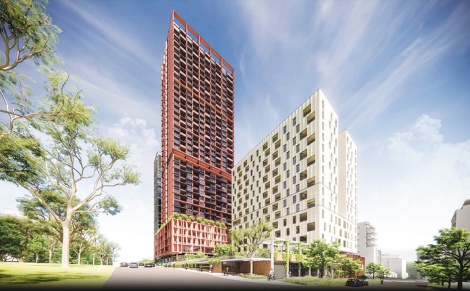 The winning design entry by MJA and Nic Brunsdon.

PLANS are out for the landmark Perth Girls School site in East Perth with a proposal for four towers, 742 apartments, a supermarket, arts hub, brewery and restaurant.

Stretched across two sites on the corner of Wellington and Bronte Streets, owners ADC and Warburton want to close part of Bronte Street to join the two blocks.

They’re billing the project as a keystone of providing housing for a growing inner-city population, and 500 of the apartments will be “built to rent”, with the developer maintaining ownership.

One hundred of those will be social housing rented out to people with income under $70,000 (or $90,000 for couples), and rent can’t be more than 30 per cent of income. Having at least 12 per cent of dwellings be affordable is a planning requirement and this one comes in at 13.5 per cent.

The heritage listed school building will be kept, with two of the 25 storey towers built atop it.

The school closed in 1962 due to declining numbers.

While there’s been a few calls in the last decade to turn the building back into a school to service the growing inner city family population, the state government sold it off in June 2017. It was the same month WA Labor canned plans for a new inner city school near the Perth train station.