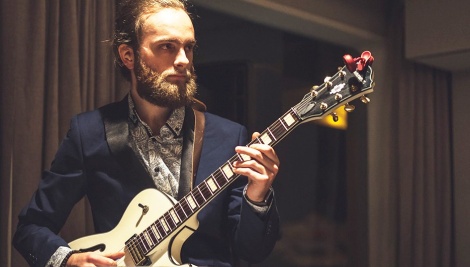 IF you chucked Glenn Miller and Led Zeppelin into a blender, you’d probably get something close to the jazz odyssey Astonishing Device.

“I’ve always been interested in shredding at high speeds, so that’s something I worked on a lot as a teenager,” Nicholls says.

“Nowadays I focus more on tone, articulation and melodic content – the more subtle side of things – however I’ve never turned down an opportunity to shred!”

After his mum bought him a $100 Casino Stage Series guitar when he was six, there was no looking back and in 2019 he graduated from the WA Academy of Performing Arts with a major in guitar and composition/arranging.

Nicholls was selected as the associate composer-in-residence with the WA Youth Jazz Orchestra, and has studied and performed in the USA and France, playing alongside notable musicians like Rai Thistlethwayte, Sébastien Paindestre and Daniel Susnjar.

Nicholls has just put the finishing touches to his latest album Astonishing Device, an ambitious blend of jazz, rock, funk and swing.

The title track – an epic jazz suite that showcases Nicholls’ compositional skills – was inspired by a scene from the movie Amadeus.

“I performed a monologue from Amadeus in high school, playing Mozart, where he’s talking to these three dried-up fossils of Viennese society, and he imagines the four of them as voices in an opera all singing together, so he says,

“That was the inspiration for the title track, where I imagine lots of musical voices intertwining and speaking over each other, while each one of them can still be individually heard.

“Overall the album is a collection of all the styles I like to write – funky, progressive, crazy big band jazz with lots of swagger, excitement and brassy textures.”

It took Nicholls about two years to write the material for Astonishing Device and another two to rehearse and record it with his jazz octet ‘Joshua Nicholls Plus Seven’.

He says the creative process often starts with a simple melody or riff.

“Generally I have some ideas swirling around in my head for a few weeks – maybe just a single melody line or a set of chords or a cool rhythm – and then I whip out the computer and start trying to develop it, add some more instruments, harmonies, basically trying to make it sound more like a full song.

“Once the idea starts to produce more ideas, then usually I can’t stop writing until the whole song is finished. Apparently it’s called ‘mania’!”

Nicholls was set to play Astonishing Device at an album launch gig at the Ellington Jazz Club this month, but covid restrictions put a spanner in the works and it’s been rescheduled to Thursday June 23.

Despite his jazz leanings, Nicholls says he still likes to rock out with his cheap, red Squier Stratocaster he learned to play on.

“The young whippersnapper that learned how to play Smoke on the Water 13 years ago is still in there somewhere,” he says. “There are plenty of jazz guitarists that use pedals with a bit of gain or drive to beef up their solos and their sound in general, like Gilad Hekselman.

“However I’m not sure many jazz guitarists would be including head-banging prog metal breakdowns in their compositions!”