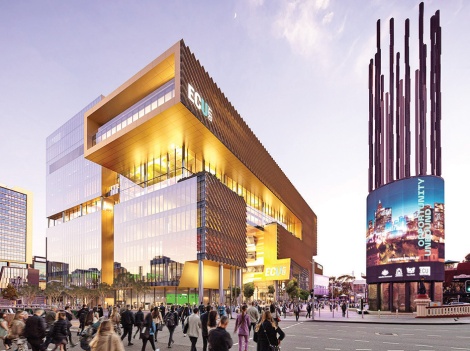 A university campus in the CBD might provide place-making and city-shaping benefits, but might not boost the economy as much as hoped.

THE value of a uni campus in Perth’s CBD was questionable even before the price tag went up by $160 million, according to Infrastructure Australia.

This week prime minister Scott Morrison was talking up the proposed ECU campus as “reinvigorating” the city centre with 10,000 students and staff to fill up bars, restaurants and hotels and bring more people to local shops and businesses.

The PM also stopped by Council House to meet lord mayor Basil Zempilas, who described a city campus as “a gamechanger”.

Yagan Square has been pretty empty since opening, with food vendors baling out and police now garrisoned to keep a lid on unrest.

A lot’s resting on 10,000 students, who aren’t traditionally big spenders. The independent advice body Infrastructure Australia looked over the Perth City Campus proposal in August last year, back when the cost was estimated at $695m.

IA’s report warned of “limited” benefits to the city’s economy.

ECU’s business case estimated a benefit of $2.5 for every dollar spent, which the uni described as a conservative amount.

IA’s report said given Covid-19, “we cannot be confident that the benefits of the project will exceed its costs”.

It did note the project’s “place-making and city-shaping benefits” might be worthwhile.

In Fremantle Notre Dame uni filled some empty buildings and brought some life to the town, but the student spend on local businesses dries up when holidays, study weeks and exams hit. Unis don’t pay council rates, either. Notre Dame pays Freo council $75,000, but mayor Hannah Fitzhardinge last year said “while this contribution is of course welcome, it unfortunately falls far short of the cost to the city for many years”.

She said it’d be better if student housing was closer so students didn’t disappear outside semester.