The long lines have left residents unhappy with the noise, blocked driveways, and pollution from cars idling near their homes.

The testing clinic is on Oxford Street, but to avoid causing chaos at the street’s busy intersections drivers have been directed to queue on the other side of the block, on residential Fairfield Street.

Resident Sophie Fernandez delivered a petition to Vincent council this week, saying locals’ wellbeing was suffering and they were “against the continued use of our street for Western Pathology Diagnostic’s drive-through Covid testing clinic.

“We feel we have been consistently ignored, and there has been a failure to manage the site in an appropriate, timely, and sustainable manner by Western Diagnostic Pathology, City of Vincent, and the state government.”

But it’s been tricky to pin down who can help them.

Ms Fernandez says the state public health emergency operation centre hand-balled responsibility for approving and monitoring private clinics to local governments, but when Vincent checked it was told it had no power at all.

“This is something that has been granted planning approval by the state government exemption for Covid-related health, under state emergency management orders,” mayor Emma Cole said.

Those orders are valid until May 2023.

“This high caseload has really started to have an impact on residents, where residents are experiencing queuing traffic with engine noise, talking on mobile phones, shouting, car horns, driveways being blocked, residents unable to leave their homes, and concerns over air pollution due to car fumes,” Ms Cole said.

“I sincerely appreciate the impact this is having on residents … I understand this is really reaching the point of frustration. We are working with you and we’re doing what we can within the power of our control.”

They’re hoping to have a response by the chief health officer and a report on what else they can do by next month’s meeting. 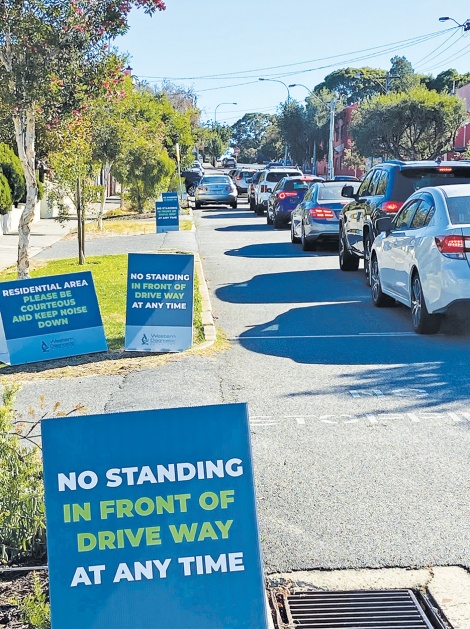 COVID’S bad for your lungs, but long lines of idling cars waiting for a test will inevitably cause damage too.

While long lines have become a common sight in Perth streets during the Covid-era, overseas many cities are banning idling engines around sensitive spots like school pickup zones.

Following a coroner’s inquest in 2020, nine-year-old Londoner Ella Adoo-Kissi-Debrah became the first person in the UK to have “air pollution” listed as the cause on her death certificate. She had asthma and died in 2013, and the coroner’s report says “the principal source of her exposure was traffic emissions”.

An estimated 4000 Londoners per year die from toxic air pollution stemming from cars, wood burners, and machinery on industrial sites.

Last year a Victorian parliamentary inquiry found “it is highly likely that [discretionary idling] has the potential to cause harm, both in the short and long term” and recommended the government consider laws against it.

Here in WA the state environment department says “it is more efficient to turn off your car and re-start it, than to be idle” when stopping for more than 30 seconds, but there’s been no moves to enforce it beyond that polite advice.