• Barry Winmar conducts the Welcome to Country ceremony at the August 16 announcement of the chosen site for WA’s Aboriginal cultural centre.

AFTER decades of talk and plans that come and go, an Aboriginal cultural centre for Perth is looking like a reality with a location chosen overlooking the city foreshore.

Currently a Terrace Road carpark operated by Perth council but owned by the WA government, it was chosen after consultation with Whadjuk representatives selected by elders.

The site was deemed the best of six options given its proximity to significant sites including Derbal Yerrigan (the Swan River), Matagarup (Heirisson Island) and Katta Koomba (King’s Park).

Whadjuk Cultural Authority representative Barry Winmar said at the August 16 announcement the spot was “an iconic location right on the foreshore.

“My ancestors walked these trails in years gone by and it’s a tribute to them to showcase the location and being a host for all those Aboriginal cultures across Western Australia, to give them an opportunity to showcase the richness and the diversity and the challenges they’ve gone through to be able to show the culture in the best light.”

Mr Winmar said “we want to be able to have an on-country experience right here on the waterfront.

“When the tourists come across the shores and they look at what Western Australia has to offer, Aboriginal culture is primary and underpinning everything that we do about our identity as Aboriginal people. It gives us an opportunity to tell our stories, see our songlines, showcase what our culture was like in art, dance and print and media.”

Premier Mark McGowan said there were “so many different sites that could be selected, but I think that they have actually chosen the best one, not just because it’s culturally appropriate and very close to the river, which is of great significance. 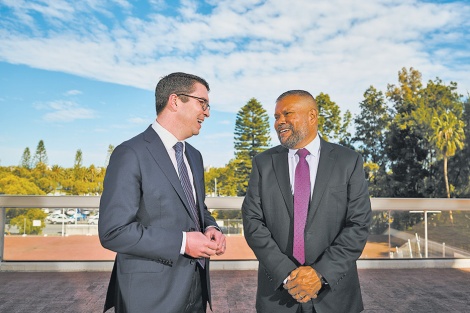 “It’s also an easy location for people to access. We want tourists from Australia, from around the world to come and visit and understand and enjoy that experience.

parts of Australia, but especially internationally, want to enjoy an Aboriginal cultural experience.

Federal Perth MP Patrick Gorman has been pushing for a centre since day dot of his time in politics, and welcomed the news.

“I’m very excited that we will have something of world class significance right here in Perth, something that not just people from other states wants to visit.

“It’s something that people from all over the world want to visit.

“This is something that we know visitors want when they come to Perth and I really feel that this project can be Western Australia’s answer to the Opera House.

“We see this as part of that great nation building project of not just getting constitutional recognition, but being able to tell the stories of 65,000 years of continuous culture.”

Perth council will lose about $1.2 million in parking fees once the state government takes back the carpark land, but lord mayor Basil Zempilas was unfazed and thought the city would benefit greatly from the centre: “The carpark land is owned by the WA Government, and as is the way with a management order that can be called in at any time.

“Our city stands to be the great beneficiary for this centre being in the City of Perth.”

So far the centre has $50m of state funding and $52m in federal funding coming out of an Albanese government election commitment.