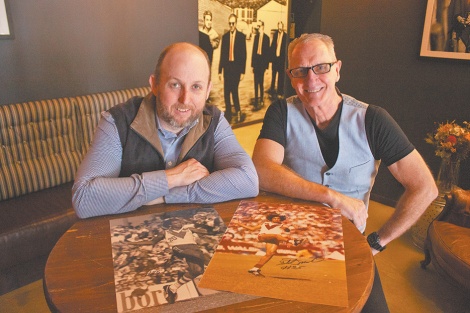 A LONGING for the rough and tumble of the WAFL’s wild days has seen crowds pack out a West Perth microcinema to watch highlights of classic local footy games recovered from decades-old VHS tapes.

Two dedicated WAFL afficionados – Sean Cowan who has an impressive collection of memorabilia and game footage, and Ian Hale who owns The Backlot Perth microcinema – have teamed up to run the Wayback WAFL events and the first two sold out with the third quickly filling.

Mr Cowan, a journalist and WA footy historian, went to his first game in 1985 and has been collecting memorabilia ever since. Many games are lost to history but enthusiasts trade old VHS tapes that’ve survived the years.

“The games themselves were so different,” he says.

“It was not the highly regimented, planned games that we see today. The style of footy was far more slap dash,” a series of man-on-man contests to get the ball to the goals.

“Whereas now it’s all about structure and planning and tactics and athleticism, and running, running, running all through the day,” with the rise of defensively-minded coaches making for much lower scores than in those old wild games.

Mr Hale says: “It used to be like a war of attrition … the first quarter it’d be haymakers going on and all that kind of stuff, and by the last quarter everyone would be knackered.”

Beyond just the love of the game, a nostalgia for the era in general is bringing in a lot of the old-time fans.

When people gather to chat at the screenings, it’s not just memories of the game they share, but recollections of “the noise and the atmosphere and the smells of the grounds”, Mr Hale says.

“The hotdogs and the hamburgers and the instant coffee.”

It was a time when WAFL players were local kings, playing for the teams in the suburbs they grew up in rather than the modern practice of being drafted from all over. It made for an electric atmosphere among the crowd, as there’d often be an even mix of opposing fans interwoven in the stand.

It was as big as the AFL, and these players were heroes … when you’re from their area you actually idolise these players. They were rockstars.” 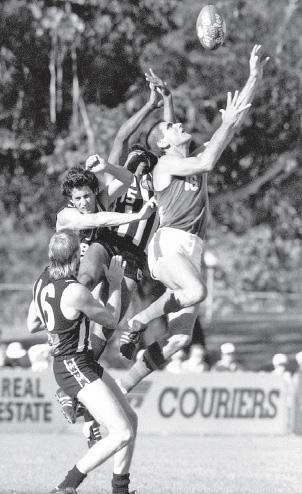 Phil Bradmore was a West Perth king when WAFL was at its height.

Supporters were so eager the matches were often sold out and desperate measures were taken just to get a glimpse of the game.

Mr Hale says he remembers at one sold out game in Fremantle: “There were people sitting in the trees where the prison is, actually sitting in trees so they could watch the game from outside the ground. That’s how packed it used to get.”

Mr Cowan says picking a team to support was “not like now, where you pick the Eagles because your family follows them, or because they’re winning, or whatever… it was because you grew up in that suburb, and in that suburb everyone supports this team. And the best players that you played alongside with in junior footy would graduate to play in that team.”

That year the West Coast Eagles and the Brisbane Bears entered the Victorian Football League, elevating VFL to the undisputed pinnacle of the game which would soon see it renamed the AFL. The best games were no longer played at the state level.

That era of the WAFL was over on “basically day one,” Mr Cowan says, when the first AFL match was played here with a WAFL match afterwards.

“It was a double header. The first game was Eagles/Richmond at Subi oval, and afterwards

was West Perth/East Perth. And after Eagles/Richmond, you just watched the crowd walk out, because the WAFL was pretty much gone. Right then, from day one.”

These days there’s more than just memorabilia and old VHS tapes to keep the memories alive, with Mr Cowan bringing in some living legends to chat about the old days like Jim Krakauer and former South Fremantle premiership captain Noel Carter.

They’ve got a Facebook page at “Wayback WAFL at The Backlot” to keep an eye out for the next events, and their third screening is on November 6 at 1pm, with a focus on the Swans’ hat trick run in the early 1980s.