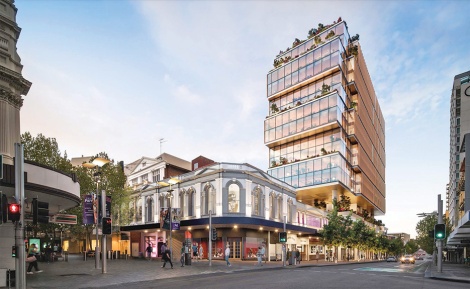 Developer Randal Humich’s vision for the Barrack Street precinct includes an arts hub supporting a reopened Liberty Theatre, but also a 29-storey office tower that pushes the city’s planning rules to the limits.

A HUGE redevelopment with a 29-level office tower is set to transform Barrack Street between the malls, and bring Perth’s Liberty Theatre back to life, but it’s at the cost of some heritage that hasn’t thrilled WA’s Heritage Council.

Developer Randal Humich united the six properties along Barrack Street under the umbrella of his company Southern Cross Properties in 2021, after nearly two years of negotiation with the various owners and says it provided a rare opportunity for a “coordinated revitalisation”.

“My vision for the site has always been to create an arts and culture hub incorporating the upper levels of Barrack Street and reactivating many of the sites’ hidden features that have been out of service for more than 40 years,” Mr Humich told the Perth Development Assessment Panel which gave the project its tick of approval.

“I’m hoping this project will provide a significant cultural and arts contribution to the Perth CBD which will include an activated laneway rich in art, landscape, and performance with a pocket park for respite and relief from the urban context.”

Mr Humich claimed a “large component” of the redevelopment was heritage conservation, but the project will see the complete demolition of the Grand Hotel on the corner of the Murray Street Mall and enough internal gutting to have the Heritage Council warning of “façadism”.

“The demolition of the Grand Hotel and rear demolition to several buildings will result in a substantial loss of heritage fabric within the Barrack Street precinct,” Heritage Council chair John Cowdell wrote to the council in August.

After initially giving the development the thumbs-down because of its impact on the state-listed Connor Quinlan building, Mr Cowdell told Perth council’s planners that revised plans from architects Hames Shirley had “partly ameliorated” the council’s concerns.

He was still urging them to retain the Grand Hotel, suggesting it could be adapted into a lobby for the office tower, but the City’s planners sided with the developer’s heritage impact statement which said its loss was compensated for by the preservation and reactivation of the other buildings.

Adding to the heritage grey area, Barrack Street and the Hay Street Mall were flagged by the heritage council as contenders for a precinct-wide state listing in 2003 which would have potentially beefed up its protection, but no assessment was carried out.

A handful of neighbouring property owners also raised some concerns, including the impact a rooftop bar above the Liberty Theatre will have on inner-city residents.

“Should the application be successful then we would ask that the building/planner consider placing noise proofing/closure on the east side of the rooftop bar to eliminate noise and that the music etc be limited to a reasonable hour and that no live bands be able to use this area,” one wrote.

Another said the office tower was out of place near the malls.

“Council has always maintained that the city malls of Murray Street and Hay Street would remain low rise area,” they submitted.

“This is to maintain the open air and family-friendly environment Perth citizens currently enjoy.

“Putting a 23-storey office tower within this zone is not [in] keeping with this sentiment.”

Another argued Mr Humich should have been restricted to just six storeys, with only another two storeys if they were set back.

But the planning report said the developer had modified the design to minimise overshadowing onto the Hay Street Mall and was “located on the northern Murray Street Mall elevation to ensure limited impact on existing heritage buildings which will be revitalised as part of the proposal.

One response to “Heritage song and dance”