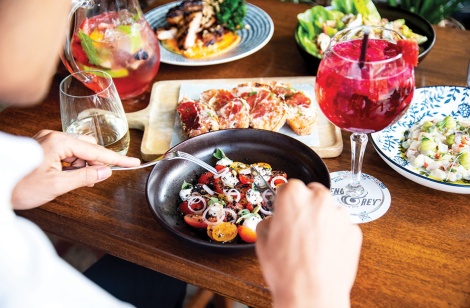 SOME of the Perth CBD is still like a ghost town on the weekend.

The stretch of Hay Street near His Majesty’s Theatre on Sunday night was a prime example.

Countless eateries and cafes, which clearly rely on trade from workers during office hours on weekdays were shut, making the place eerily quiet and feel slightly unsafe.

You can’t blame cafes for not opening if the custom isn’t there, so hopefully initiatives to get more people into the CBD will pay dividends (nearby Shafto Lane was packed to the gunnels, so it’s clear people will venture in if the attraction is there).

Anyway, my wife and I were en route to Heno & Rey, a tapas restaurant connected to the InterContinental Hotel.

With its expansive, classy alfresco, it’s a lovely spot to sit and enjoy a casual meal while watching the world go by.

It feels a bit up-market without any of the pretension and stuffiness.

The menu is divided into breads, seafood, charcuterie, cheese, tartare, ceviche, tapas, large plates to share and some desserts.

It’s a large selection that would cater for different tastes and occasions from some cheese and wine to a full-blown meal.

There was also a fixed Madrid Menu for $74 per person (minimum two people).

Unfortunately one of my favourite dishes, the snapper ceviche, wasn’t unavailable so I went for the smoked eggplant tartare instead ($18).

It was a lovely offering with the lightly toasted bread perfect for dipping into the smoky eggplant tartare which was enhanced by the black tahini (a paste made from black sesame seeds) and coriander.

The eggplant was spot on, just the right smokiness, and a scattering of pine nuts gave the whole dish a fragrant boost.

The Spanish meatballs ($18) continued the high standards, with the fine minced meat crammed with flavour and herbs.

There were plenty of meatballs, semi-submerged in a rich, moreish tomato sauce.

I know you can order bread separately, but I felt some toasted bread should have been included so you could mop up that gorgeous sauce. One of my favourite dishes, grilled octopus ($23), didn’t hit the same heights.

The execution was there – the thick tentacles were perfectly chargrilled and accompanied by romesco, capers and chargrilled cauliflower.

But the octopus was slightly chewy and a bit lacking in flavour.

Maybe because the fleshy chunks were so thick, they didn’t have the same intense flavour I’m used to.

My wife “Special K” was getting excited as the waitress arrived with her favourite tapas dish croquetas ($17).

They were a creamy delight with a lovely crispy exterior and cheesy ham innards, which tasted delicious when dunked in the accompanying aioli.

Heno & Rey also has an extensive range of beers, wines and spirits and I enjoyed a very smooth Hayman’s sloe gin and tonic ($14) while my wife had a Sangria laden with fresh fruit ($15).

Heno & Rey is a great option if you’re up that end of the CBD at the weekend and feel like some quality food in a casual, upmarket setting.