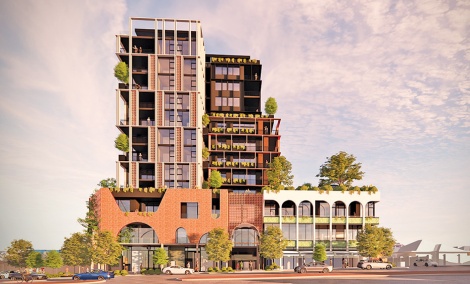 • Former mayor Nick Catania chaired a town meeting opposing the project, packing out the Royal Park Hall so much they ran out of chairs. Photo by David Bell.

MORE than 100 townspeople packed out a public hall to air complaints about a 13-storey development planned for a strip of North Perth.

Celsius Property Group wants to build a 13-storey and an 11-storey tower on a large Fitzgerald Street block stretching from Raglan Road to Alma Road, though under Vincent council policy it should only have up to six storeys.

It’ll have 97 apartments, ground floor shops and a couple of levels of offices.

Celsius originally planned to build 16 storeys on the site, but even shrinking the height to 13 hasn’t pleased a lot of locals.

So many people showed up the hall ran out of chairs, a show of opposition at a level rarely seen in Vincent.

Ms Fontaine says: “The key concerns centred around the bulk and scale of the building, overlooking and overshadowing, and traffic volumes on adjacent local streets, the use of the narrow right of way which would be dominated by the collection of rubbish, and the delivery of commercial products at all times of the day and night was also discussed.”

The decision to approve or deny goes to the Joint Development Assessment Panel which has three state government-appointed members and two Vincent councillors. A majority of three votes is needed for approval, and the JDAP’s traditionally seen as pretty pro-development and has given a lot of similar projects discretionary allowance to go above local council limits.

Perth MP John Carey attended, and while keeping neutral advised residents to stick to planning issues if they wanted the JDAP to hear their voices. 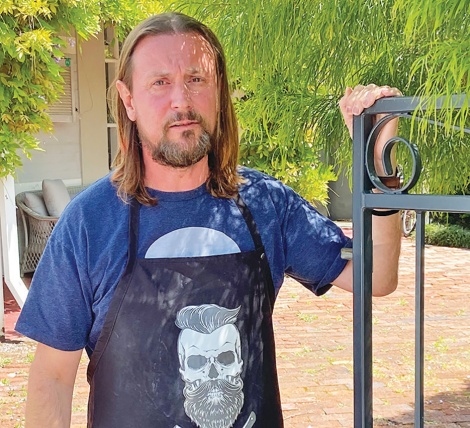 Resident Neil Stacey lives next door to the project and says he’llfight it tooth and nail. Photo by David Bell.

Back when he was Vincent mayor he brought in the 2016 policy that allowed four to six storeys in this part of North Perth.

“We do need development, we do need infill,” Mr Carey said, so residents should focus their argument on planning rules, “bulk, height, traffic,” instead of railing against the existence of apartments.

“We’re not against development,” resident Neil Stacey told the Voice this week, speaking outside his one-storey 121-year-old home Alma Road that neighbours the project site. They just want something a quality development that’d fit within the council’s limits.

“I think what the residents are looking for is the same rules and regulations that apply to other ratepayers to apply to them,” he nods towards the Celsius block.

Celsius’ managing director Richard Pappas tells the Voice the current design with its 13 and 11 storeys is a better outcome than a shorter building they could likely get approved on the site.

Mr Pappas says given similar projects approved around Vincent that are above the usual storey limits, they could probably get a big, wide eight-storey project approved without much hassle.

This design instead shifts some of that bulk into two towers that are closer to Fitzgerald Street, so the residential neighbours to the rear only face three storeys instead of a possible six or eight.

“In our view this is a better outcome,” Celsius’ project manager Matt Evans tells us.

Mr Pappas says they’ve gone the extra mile on community consultation, and during their open days held on site a majority of people have been supportive.

Asked why this one had brought in an unusual amount of opposition for a project in Vincent, Mr Evans says: “I think it’s because we’re the first”.

“I think there’s no question this development has caught the attention of a reasonable number of the community,” Mr Pappas says.

“Vincent is the last near-city [area] that doesn’t have any height.”

Community consultation is via imagine.vincent.wa.gov. au and closes October 17, then Vincent council’s planning staff will prepare a yea-or-nay recommendation for the JDAP to make a final decision.