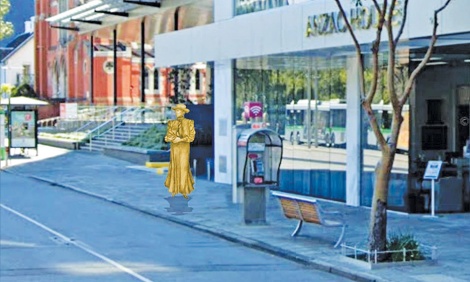 • The Edith Cowan statue will look across the road to contemporary activist Fanny Balbak from Anzac House.

A STATUE of pioneering politician Edith Cowan, gifted to the City of Perth, has been approved for the front of Anzac House on St George’s Terrace.

The $245,000 commemoration of Australia’s first female parliamentarian was paid for by councillor Sandy Anghie and her husband Michael, a CEO at APM Group and former director of the Art Gallery of WA, and approved by the council at Tuesday’s ordinary meeting.

The proposal has been kicked around for a while, with Cr Anghie’s original motion to have the city fund a statue to women getting knocked back in 2021. Even her gifted offer took some negotiating when some argued the proposed Edith Cowan University campus in the city might be a better location.

But lord mayor Basil Zempilas noted the large contingent of statue supporters in the public gallery on Tuesday, saying their passion had helped secure the location.

“The contribution of Edith Cowan can absolutely not be considered with anything other than the highest acclaim and regard, and if a councillor and any other person in our city wishes to provide us with a gift to honour somebody and it meets with the proper and necessary council approval to go in the site that those benefactors have identified, then who would this lord mayor be to stand in the way of that happening,” Mr Zempilas said.

His preference was for a recognition such as the Keys to the City he championed for athlete Sam Kerr earlier this year, but still put his hand up to support the Cowan statue.

“I thought there were better ways to be celebrating women and their achievements in our city, but primarily I thought this was not the best use of ratepayers’ funds,” Cr Gordon said.

“However, we have the opportunity now to be gifted with a sculpture of that nature, and therefore I’m supportive.

“It’s apparent the artistry of the Smith sculptors – their pieces are elsewhere in the city – so I’m glad to be receiving another one.

“What was apparent from last week’s deputations is that individuals that frequent the area are going to be very grateful to receive such an installation.”

The motion to approve the statue was amended slightly by new deputy mayor Liam Gobbert to include a maintenance and replacement schedule.

“We know from past experience the city inheriting public artworks can be potentially be fraught with the ongoing maintenance and then the ongoing renewal; potentially impacting on the amenity of the area,” he said.

Councillor Di Bain thanked the Anghies for their gift: “A quarter of a million; you don’t get one of those gifts every day of the week, so I’d like to congratulate them for their generosity and thank them on behalf of me, for the city,” Cr Bain said.

Suzanne John coordinated the various groups behind the sculpture, including the Karrakatta Club, the Returned Services League and the architect of Anzac House and welcomed Tuesday’s decision.

“After over two years of working towards this and 90 years since Edith Cowan’s death, she will stand looking toward Fanny Balback, the indigenous civil rights advocate; two powerful women living and working towards their related aims in the same era,” Ms John said.

“Prior to this, the only female on the city’s main thoroughfare, St George’s Terrace, was a kangaroo, so this represents a small but important step forward in balancing history’s ledger.”