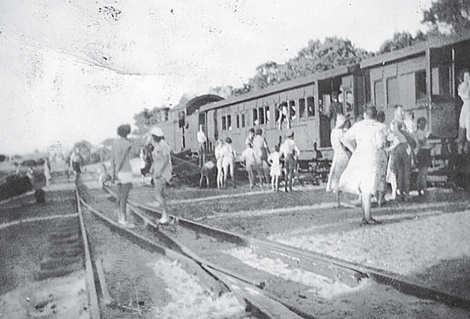 The opening of Perth to Fremantle railway opened up the city’s beaches to many in the days before car ownership was so common.

WITH warm weather seeing people flocking back to the beach, this week the archivists at Vincent Local History Centre continue the series on memories of summer by bringing us back to a time before the beach was a popular swimming spot.

BEACH culture is synonymous with Perth, but this has not always been the case.

Most people did not look to the sea for recreation until the 1880s, when the opening of the Perth to Fremantle railway made beaches more accessible.

After World War I, City Beach became more popular with the introduction of a plank road in 1918.

By the 1930s, swimmers could paddle and promenade at a range of beaches along the coast, from South Beach to Scarborough Beach.

Today, a trip to the beach for Vincent locals is just a 20-minute drive or an hour-long bus or bike ride.

“Every year we used to go to Coogee Beach with dad… that was our Christmas holidays,” Ms Slyth said.

“Usually, it was two weeks but sometimes on rare occasions, it was three weeks.

“We’d pack up all the tents, bars and poles for the tents, the flies you put over the tents and all the hessian flooring and then you’d have a little miniature water cooler.

“When we got down there, we had to help dad pull all these things up.

“Every other year I remember it used to rain at least one night, or one day there’d be a storm.”

Ms Slyth said her family used to go fishing, where they used to throw from the shore as there was no jetty.

“After a couple of years dad used a little rowboat, which I insisted to be called ‘the Marie’,” Ms Slyth said.

“I used to help dad row into the deep (sea) and we’d throw the line and catch fish and bring them in and have them for breakfast sometimes. Mum had to always scale the fish, but she used to like to come fishing too.”

There was an old wreck off Coogee Beach where Ms Slyth’s family used to walk, climb up the side and look at the water in the middle section.

“In the very clear water, you could see coloured fish – football fish we used to call them – with coloured stripes on them, and climb through the portholes on the boat,” said Ms Slyth.

“Sometimes we used to go in the evening and sit on the beach on mats.”