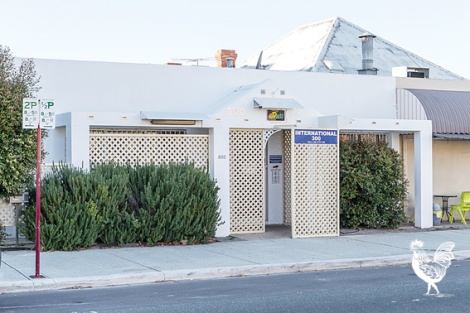 • One of the brothels you can ask Tom Tom to find.

Satellite navigation company TomTom allows a list of 18 Perth and Fremantle brothels to be made available to drivers as “points of interest” on its WA map.

The list—created by Perth cabbie Phillip McGree— is free and can be downloaded by anyone with a compatible TomTom who connects to its online update service.

It is unclear if TomTom validates or regulates user uploads, although there is a “report as offensive, copyrighted etc” feedback option beside the POI download.

The brothel POI is rated 3.5 out of 5 by TomTom users.

Prostitution in WA is legal but operating a brothel is not.

For years WA police have turned a blind eye to bordellos and unofficially regulated them, much to local councils’ and residents’ chagrin.

In 2011 the Barnett government attempted to introduce new prostitution laws to ban brothels from residential areas and make them legal in limited industrial zones. The bill failed to gain political traction and was dropped from the government’s legislative agenda following the March election.

Veteran cabbie Stephen Satchell says he drives around 30 people—five per cent of his fares—to Perth knocking shops every month.

“I’d say that about 75 per cent of my brothel fares are FIFO workers in their mid-20s, the rest are middle-aged men on interstate business.

“The majority of them go at the weekend, between 2am and 6am on a Sunday morning, but I get a few randy ones during the week as well.

“Langtrees in Burswood and International 300 in East Perth are my most popular drop-offs.”

The Voice gave TomTom two days to comment, but the company didn’t get back to us.