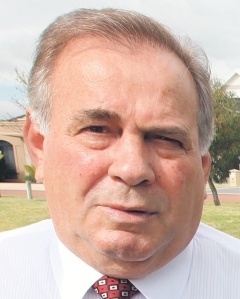 ‘We make no apologies whatsoever. Some people might be over-sensitive.’ – Stirling mayor, Giovanni Italiano

BAYSWATER councillors are frothing with anger after neighbouring Stirling appeared to mock them in a cartoon shown at an anti-amalgamation rally.

The animated video shown at the Stay in Stirling rally refers to an “irresponsible neighbour” that gets to enjoy its more prudent neighbour’s riches: it’s been taken to be a thinly disguised reference to plans to carve Inglewood out of Stirling and hand it to Bayswater.

“They bought what they wanted and they lived extravagantly,” says the video.

“They didn’t save their money, they used credit. They didn’t think about what may happen in the future.

“Then one day a decision was made to take away all the cautious neighbour’s savings and investments and share them with the irresponsible neighbour.

“Do you think that is fair? Well that is the reason we are here today.”

Bayswater councillor Chris Cornish attended the rally and filmed it. He was still steaming a few days later.

“Stirling doesn’t have the right to throw mud at another council!”

“This goes beyond the pale!” he fumed at Tuesday’s council meeting, whipping his colleagues into an anti-Stirling frenzy. They voted to complain to WA local government minister Tony Simpson and express “severe disappointment” at the implication they were financially irresponsible.

Veteran Cr Barry McKenna went on an epic rampage about Bayswater’s superiority to Stirling, referencing the neighbour’s recent problems with refuse collection and piles of rubbish on verges.

“Stirling doesn’t have the right to throw mud at another council!” he bellowed.

Mayor Sylvan Albert says so far his council has taken the moral high ground in the mergers process, despite having its heritage credentials brought into question by the Mount Lawley Society.

Stirling mayor Giovanni Italiano refuses to confirm Bayswater is the “neighbour” referred to.

“It is what it is and we make no apologies whatsoever.