PERRIER for the nostrils, designer air tailored to complement the occasion—or the dinner menu—Ben Elton’s Gasp is all about corporate greed and making the suckers pay.

Mining is in decline because most of Australia has been shipped overseas, so a new market is needed, and air becomes just another commodity.

More than 25 years old, Gasp has been virtually rewritten for an Australian audience by UK-born Elton, now an Aussie living in North Fremantle.

The bottom line message is the destruction of the environment to fuel corporate greed, packaged as creating a healthier lifestyle, and jobs.

And Elton flogs his line mercilessly—with machine-gun velocity jokes that just about make the ears bleed. 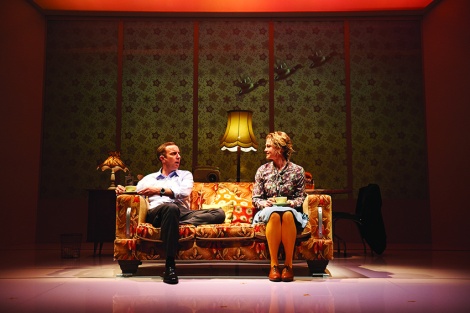 The rebadged version tosses Gina Rinehart and Clive Palmer into the mix, along with a hailstorm of jokes about mining selling out Australia to supply the latest must-have gadget around the world.

The audience laughs on cue every time, despite drowning in fast-paced metaphors and double-entendre and innuendo.

They even laugh at a joke so old and corny it was probably written by Benny Hill (I suspect Hill was the inspiration for many of the jokes).

A young girl is at the doctor: “Big breaths,” he says. “Yes, doctor and I’m only 16,” she lisps. I mean really, REALLY? From the man and the brain and the talent and the wit who brought us The Young Ones and Blackadder? A tits joke? FFS.

The cast was fantastic, keeping up the pace of witty one-liners, but the characterisations are pure caricature and creaking  stereotypes. McNeill, as head of the corporation, is one-dimensionally ruthless. Steven Rooke as Sandy, his right-hand man, is the toady of all toadies.

He’s soon outclassed in the corporate world by the man who came up with selling air, Phillip, played brilliantly by Damon Lockwood. Phillip is the classic poor boy (in love with a sweet girl) made good, turned bad by corporate greed, and you just know where it’s all going. 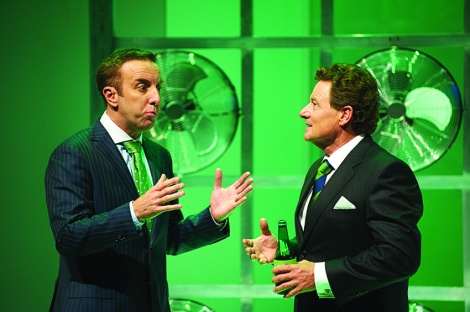 Caroline Brazier as the PR company mega-bitch is a little grating, but that could just be the over-the-top hard-arsed character she plays. You know, a PR woman and therefore hard-arsed career bitch. Of course. All that’s missing is the shoulder pads.

For me the absolute standout is Christina Smith’s set design, where props effortlessly, almost magically, glide on and off stage with no apparent hand guiding them. And Trent Suidgeest’s lighting adds real punch.

There’s nothing subtle about Elton’s Gasp, but the rest of the audience didn’t seem to mind. Didn’t take my breath away though.

Gasp is on at the State Theatre until November 9. Tickets at Ticketek.