Sutherland enjoys support
CONTRARY to the baseless claims about the local Liberal party in your story “Merger sparks Lib feud” (October 25, 2014), I can assure you Paul Collins’ views are not shared by local party members.
Michael Sutherland is a popular, well-liked and respected local member of parliament. The personally insulting view of one Liberal Party member does not constitute a feud in the party.
On the issue of local government boundaries, I have a suggestion for judging the issue in a balanced way: just ask yourself if anyone has ever asked you “what council do you live in?” I can’t remember ever being asked such a question, which is a fair indication of just how much, or little, importance we give to local government.
I have recently moved house from Menora to Mt Lawley and I suffer no anxiety about which local council will collect my rubbish, look after roads and parks, and do all the things local councils do.
Paul Mannion
Robinson Ave, Belmont

Line toe-ers
I AM one of the thousands of Stirling residents who attended one of the three public rallies or signed a petition to stay in Stirling.
Representation on this issue by Messrs Britza and Sutherland was insipid. On the other hand Eleni Evangel’s representation of Perth electors in Vincent was vigorous and influential.
Whilst Messrs Britza and Sutherland were more interested in toeing the party line, Ms Evangel showed the interests of her electors come before party politics and broken election promises.
Kathy Swavley
Collingwood St, Dianella 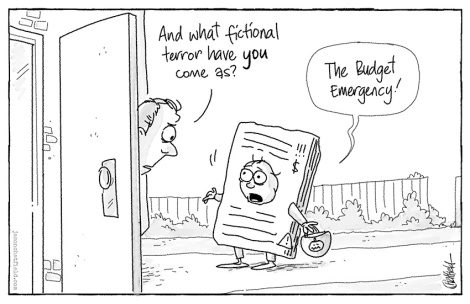 Second-class
I HAVE been a long-time critic of the current and proposed development of units in the stretch of road from the Fitzgerald/ Walcott Streets lights to the North Perth shopping centre.
By my calculation there is more than 100 to be built on what I can work out is less than 10 house blocks. More importantly to me is an area bounded by Walcott /Fitzgerald Streets and Russell Avenue.
In the article “By Joh!” (Voice, October 25, 2014) mayor John Carey says “Vincent residents are not second-class citizens” but as far as I am concerned the council is already treating us that way now.
I would be very keen to ask the council what, if any, consideration it has taken when it has passed these developments about the effect this will have on lifestyle and real estate values.
The seemingly relentless nature of passing unit developments in the area I have mentioned appears to me nothing more than a money-grabbing excise by the council with little consideration taken for the effect it will have on current residents, not to mention the social effect of “packing” so many people into a small space.
John Matthews
Little Walcott St, North Perth

Building ruins
I WAS at the Stirling council meeting addressed by WA local government minister Tony Simpson who said the city had a 91 per cent ratepayer approval and was considered a model local authority.
He may have also observed it is debt-free, funded its capital works from within, had one of the lowest rates with all its facilities paid for and with the popularity of the Terry Tyzack swimming pool ensures it is the only one paying its way.
So what does the Barnett government do? Instead of bringing the other local authorities up to the same standard it pulls this model local authority apart.
Goodbye Mt Lawley, Inglewood, parts of Menora and Dianella and the Inglewood swimming pool.
This mob has been at it for five years and instead of the pyramids has left us with the ruins of Pompeii. Now we are threatened with legislation to force through the emperor’s bidding because we, including the Mount Lawley Society who are the greater representatives of local residents, are against the carve up of a perfectly working council.
Barnett was a member of the Court government which carved up the City of Perth. Now the Liberals want to use my money to put it together again—what a wasteful mob they are. It’s not unlike Humpty Dumpty—neither the king’s horses nor the king’s men will put it together again!
Unlike Perth MP Eleni Evangel who stood up for her constituents what ever our member for Mt Lawley did has amounted to nought.
There is a change in the boundaries of Legislative Assembly districts coming so maybe our member does not care. Maybe it is time for a new representative.
Arthur Mistilis
Carnarvon Cres, Coolbinia

Low blow
WITH local government reform the Voice seems interested only in cultivating antagonism towards the Liberal Party.
The stories in your October 25 issue covered the same gripes from the same people who have been given coverage in your paper in the past. But you sank even lower by reporting the grubby attempt by Paul Collins to link local government changes to Michael Sutherland’s wife. What is the link to his wife, who is unaffected by the changes?
Why do you go to Paul Collins for an attack on Michael Sutherland every time the local government matter comes up? Is there really nobody else who can comment without personal insults?
Christopher Stafford
Rookwood St, Mount Lawley
The Ed says: This letter has been significantly edited for length.