AFTER waiting six weeks for Vincent council to take action over an unkempt privately-owned block in Mt Lawley, local Liberal MP Michael Sutherland got some gardening tools and tackled the problem himself.

“I’m a hands on MP,” Mr Sutherland told the Voice. “I should have sent you a picture of the rubbish I pick up around my neighbourhood!”

He got in touch with the Vincent staff on October 10 to again remind them that the block near the Mt Lawley underpass and the land under the billboards was “an eyesore and … sadly neglected”. 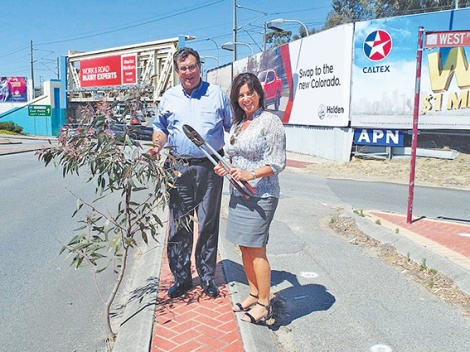 •Michael Sutherland waited nigh on two months for council action before teaming up with Vivian Ferrante, arming himself with lopper and saw and taking action.

“I reminded them, and they didn’t do it, so I thought bugger it I’ll do it myself.”
Mr Sutherland and Vivian Ferrante headed down with a set of shears and a can-do attitude.

Despite the delay he is sympathetic towards councils, saying they’re in a tough spot trying to deal with empty blocks where people keep dumping rubbish.

“There has been an increase in the littering fines, substantial increases, but it’s a case of catching these mongrels.”