NEVER Tilt Your Chair Back on Two Legs is a sonic double bill of percussion, exploring the role of women throughout history.

Mum’s dinner table etiquette on chair tilting and elbow leaning probably didn’t include the musicality of knives and forks.

The Bayswater local has performed with the WA Symphony Orchestra and the Malaysian Philharmonic Orchestra and her music has taken her around the world, including the US, UK, Germany, France, Japan, China and  South Korea. 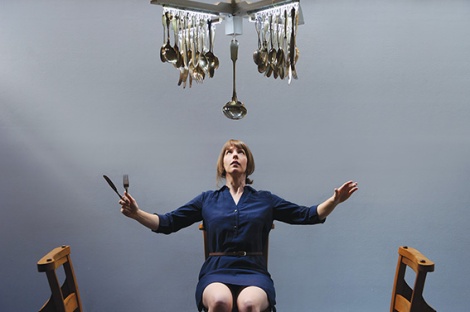 • Leah Scholes gets all John Bonham with her mum’s cutlery. Photos
suppliedAn advocate of Australian music she has commissioned more than 40 percussion works and recently completed a music doctorate at UWA, where she is head of percussion.

She’ll will be joined by fellow percussionist Leah Scholes and Vanessa Tomlinson on stage for Never Tilt Your Chair, while Australian composer Kate Neal is on tour with them.

Top of the bill is a feminist take on composer Mauricio Kagel’s composition Dressur.

Kagel revolutionised musical performance in the 70s, introducing an absurdist element to his works. He composed a ballet for non-dancers and asked musicians to adopt certain facial expressions  or gestures while playing.

“It is quite important in contemporary music history and the history of instrumental theatre,” Devenish says.

Dressur was written specifically for male voices and body, and while it’s been popular in Europe the trio’s performance, which marks the 40th anniversary of its composition, will be the Australian premiere. 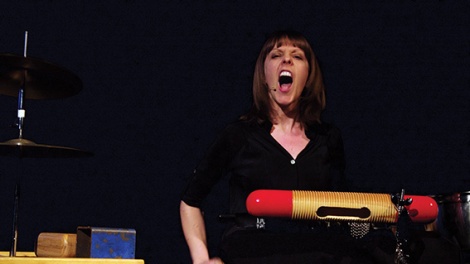 Tomlinson, Scholes and Devenish’s feminist revision will: “Becoming a significant contribution to the performance history of the work,” claims the latter.

Neal, who hails from Victoria, took out the 2016 Art Music Award.

Her compositions are also known for incorporating theatrical elements such as physical gesture, design and choreography, and her new work focuses on the percussive tone of everyday objects.

It features new hybrid instruments, including a mechanical chandelier, and chronicles two centuries of women’s domesticity and social customs.

Never Tilt Your Chair Back on Two Legs, co-produced by Tura New Music, is at PICA, James Street, Northbridge from April 10–11.