LINDA FARDOE’S solo exhibition Presence and Absence deals with memory, loss and the passage of time.

Despite an impressive track record of exhibitions, including several in the UK and US, it is the first time the Mt Lawley artist been able to dedicate herself solely to her art.

Fardoe’s time had been split between teaching and extended trips to England to visit her ailing mother.

The death of her mum four years ago meant that Australia finally became her home after years of to-ing and fro-ing. 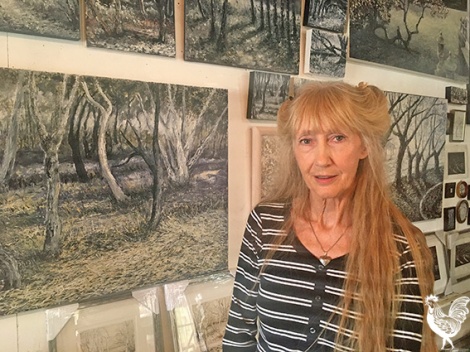 “Half my life was in the UK and half in Australia,” she says, pointing at an artwork depicting an English rose and wattle, the British heraldic lion and a kangaroo.

“With myself as Daphne, morphing into an oak and eucalyptus tree, symbolises the letting go of my heritage.”

A recent exhibition at UWA, which focused on humanity and the inevitability of death, influenced Fardoe’s work.

“This has been a recurring theme of mine but more recently has primarily driven my work,” she muses. 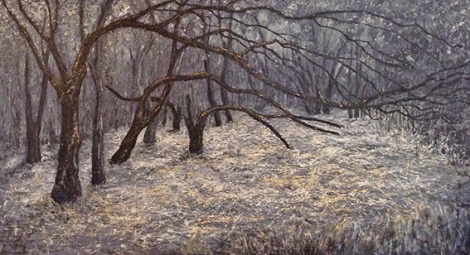 “The loss of so many family members and friends, some so untimely, has made me consider my own mortality.”

“Parks and woodlands have been my bolt holes for as long as I can remember,” she says. “This is where I search for solace and contemplate what lies beyond.”

The images emerge from the canvas from a mass of marks, and Fardoe uses a wooden kebab stick, fingers and occasionally a rag for larger areas.

Presence and Absence is at the Turner Gallery, William Street, Northbridge, until June 17.