PAULINE HANSON’S latest thought bubble of shunting autistic kids into “special” classes earned a dunce’s hat, but I still feel bad for the Paddo after its shin-kicking from supposed friends for hosting a meet-and-greet with the controversial Queensland senator in March.

Talk about shooting the messenger.

There’s a disturbing trend in modern ‘debate’ of shouting over people we disagree with and regurgitating their arguments in such black and white tones that others are denied the right to hear them or their nuances. I don’t care if you later tuck yourself into bed full of self-righteousness; it’s plain brownshirting.

So I was pleased the Paddington’s management stuck to their guns and went ahead with Pots & Pizza with Pauline, and with a belly full of self-righteousness I popped in this week to square the ledger with a free speech thumbs-up via a glowing review; fingers crossed the kitchen was up to it.

And it was; good value and tasty pub grub.

I started with a taster of cauliflower and garlic soup with some toasty bread alongside ($9). The garlic was nicely balanced to add a great taste to the cauliflower without overpowering it, and the overall texture was smooth and creamy, a drizzle of oil across the top helping out. 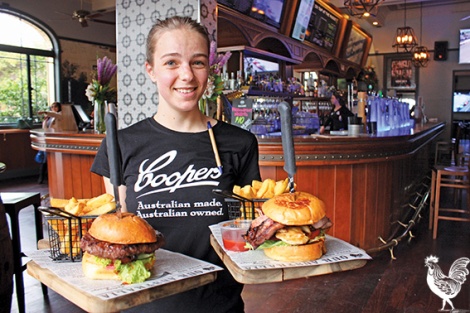 I must have been a wolf in a previous lifetime, because I’ve had crazy lamb cravings recently, so jumped at the chance for sumac crusted lamb cheeks with a bed of mash and a couple of asparagus spears lounging across the top ($26).

Sumac is actually a fairly wide-spread spice, though it’s more commonly used in Middle Eastern cooking. It’s sour, lemon-like flavour is used to wake up the taste of the main dish, and it did a particularly good job on the lamb, which also came with loads of a delicious, red-wine jus.

The lamb itself was well cooked and tender, and came with just the right amount of fat to keep me satisfied but not feeling ripped off.

The mash was warm and creamy and the asparagus had just a hint of crunch left in them.

The generous soul behind the counter had signed me up for the takeaway cake and coffee deal, though I was well and truly glued to the seat near the fireplace, so I scored an apple and rhubarb crumble and coffee for just $7.50.

The rhubarb was just a touch underdone, leaving me with a couple of stringy and blobbish lumps to deal with, but the flavour was still excellent and with a dollop of ice cream on top did the job of filling me up.

The coffee…well, I had just enough left in the glass of a nice Serafino shiraz ($7) to wash that away, but really, it is a pub so I wasn’t expecting too much.

The Paddo’s a local institution, and with the local precinct aiming for some rejuvenation, it should be with us long after politicians come and go.