HOMELESSNESS is rife in areas near Weld Square despite a line of empty Housing Authority homes crumbling away on nearby Parry Street.

Local resident John Collins says he often sees homeless people in the area, and when Voice was there a man rocked up to his makeshift camp on the porch of one of the empty two-bedroom houses. Mr Collins reckons there’s about six empty department properties on Parry Street.

“We have a considerable number of people who are still homeless, in the park and in the area,” he says.

“Why are there properties left vacant? 139 and 141 [Parry Street] have been vacant for over 12 months.

“141 was perfectly liveable when the lady moved out.”

The Voice understands that one of the heritage-listed houses had some termites, but answers from the Housing Authority weren’t big on detail. 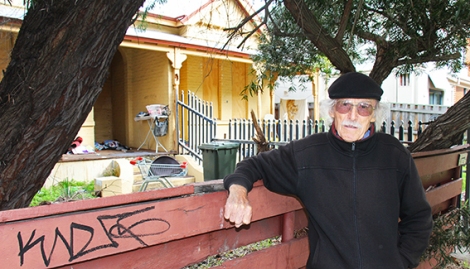 • John Collins says he can’t see why these houses remain empty while people sleep rough on the streets. Photo by Steve Grant

“The department is currently considering options for their future use.”

The nearby Stirling Towers, a large Housing-owned block, has been empty for four years.

The department announced it’d be demolished back in January 2016, with plans to replace it with a mix of social housing and commercial apartments.

They advertised the tender to demolish it in December 2016.

That never went ahead and in July last year they put up a colourful fence, painted by mural artist Mel McVee, to make it less of an eyesore.

Mr Cash says the department “expects to make an announcement about the demolition and redevelopment of the Stirling Towers site towards the end of 2018”.

In the meantime, much of it’s boarded-up to stop people trespassing.