A TREASURE trove of artefacts found under the floorboards of the old Perth Girls’ Orphanage on Adelaide Street will provide a rare insight into the life of the young city’s underprivileged children, says the WA Museum.

On Tuesday the artefacts were handed over to the museum by the department of communities’ housing authority which occupies the building.

• Archaeologist Caroline Bird from Archae-aus, Housing Authority IT expert Richard Barry and collections and research director at the WA Museum Diana Jones with some artefacts unearthed at the old Perth Girl’s Orphanage. Photo by Steve Grant

Authority IT expert Richard Barry used to be one of the public servants beavering away in the heritage-listed building, and says growing maintenance issues reached a critical level when a couple fell through rotting floorboards.

Experts were brought in to assess the damage, and when they reported back about seeing interesting things under the floorboards, the department decided to call in archaeologists Archae-aus for a proper dig.

Archaeologist Caroline Bird said a small orphanage was constructed on the site by the Anglican church in 1868. That was in response to a Catholic orphanage being set up in Leederville to cater for the growing number of children who were being taken off the streets and put in the city’s workhouses.

Initially seven girls were taken, then boys, and numbers grew gradually until in 1871 the church convinced the government of the day it needed room to expand and the boys were moved to a new orphanage in Middle Swan.

Dr Bird says the gold rush of the late 1800s sent demand for places soaring and the current two-storey building was constructed in 1904. 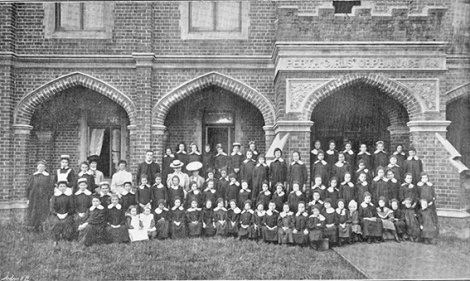 • In the gold rush era there was greater demand for places for children at the Perth Girls’ Orphanage. Photo courtesy Department for Child Protection and Family Support

She says the artefacts were a mix of small objects such as pins and buttons that may have fallen between the floorboards, while others were deliberately put there; a small metal money box with the initials “LJ” scratched on its side was probably stored for safe keeping.

She said finds such as the money box immediately set the mind to thinking about the story of the person who’d once owned it.

WA Museum collections and research director Diana Jones said children were under-represented in the museum’s collections, so she was excited to be accepting the artefacts.

Other finds included in the gift to the museum include toys, hairbrushes, animal bones and medicines.

There’s long been rumours that the orphanage is haunted (you can find its listing on theparanormalguide.com) by one or more of its previous occupants, but Mr Barry says while he’s aware of staff who’ve refused to work there or visit at night, during his many nocturnal shifts updating department software he found the orphanage to be one of the most peaceful and quiet places to work.