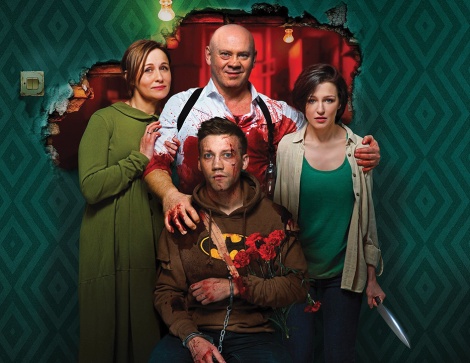 THE Russian Resurrection Film Festival returns to Perth this month with more pulse-racing action than a bare-chested Vlad Putin on a wild stallion. One film which caught our attention is Kirill Sokolov’s award-winning blacker-than-charcoal comedy/horror, Why Don’t You Just Die, which chronicles a night of blood-spurting mayhem when a group of disgruntled misfits are brought together under one roof. International film lovers can be corrupted by the Russian Resurrection Film Festival when it hits Event Cinemas in Innaloo from Wednesday, October 30. Tickets via http://www.eventcinemas.com.au

Uber-independent Perth-shot feature Tainted Getaway will have its world premiere at Luna Leederville this month. While Sydney and Melbourne consistently produce a huge number of independent feature films without government support, Perth is seriously lagging behind. Directed by Desmond Hew, Scott A Summers and Rizal Halim, Tainted Getaway is produced by Rod Manikam via his production company Rodman Pictures which strives to give WA actors the opportunity to showcase their talents through independent Perth productions. “It’ll be nice for local film lovers to help us navigate the industry in the right direction as WA deserves to show the world that we have so many talented graduates from one of the best arts and performance schools in Australia (WAAPA). They deserve a chance to show what they are made of,” Manikam told the Voice. Tickets via http://www.rodmanpictures.com.au

The Light, another independently produced feature, will enjoy its first screening on October 27, also at Luna Leederville. The Light is an intriguing coming-of-age thriller about a group of teenagers hounded by a violent, masked gang. The Light is directed by first-time feature filmmaker Zack Inglis – an Edith Cowan University graduate who grew up in Kalgoorlie where The Light is partly shot. Inglis started developing the script back in 2015 and assembled a small but dedicated team of film lovers to bring his vision to life including co-producer Robert Faulker and cinematographer Gavin Docherty. Tickets and further details about the film can be found at http://www.thelightfilm.com

Local audiences will get the chance to see Australian director David Michod’s The King on the big screen during an exclusive, limited run at The Backlot Perth from October 11. This is the only opportunity to catch The King in a cinema before it drops on Netflix November 1.