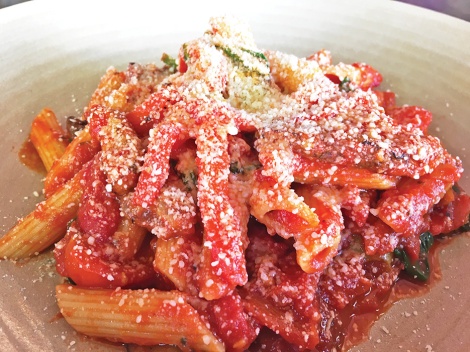 THE cake cabinet at Fiorentina Patisserie looked so good I thought about having a sweet for lunch.

Like a kid in a lolly shop, I was almost drooling at the colourful array of tortes, tarts and Italian biscotti.

But I’d already ordered, so I decided to take home some cakes instead.

Sipping a freshly squeezed beetroot and apple juice ($7), I took in my surroundings from the alfresco on the pavement.

Angove Street was a hive of activity and there was plenty to keep me entertained while I waited for my penne primavera ($16.50).

Fiorentina has been baking up a storm since 1974, originally selling goodies to homesick Italian migrants.

The eatery moved to North Perth in 1996 and while the food retains a very Italian flavour, there’s something here for everyone.

I can’t go past a good pasta and this one was “eccellente”, with a rich tomato sauce and lashings of whole black olives, sharp cherry tomatoes and spinach.

The cakes were beckoning, but I felt pretty full so I got a sfogliatella ($5.50), which was smaller and less rich than a slice of torte.

Sweet, but not overpowering, the sfogliatella resembled a clam shell, with layers of crisp, flaky pastry and a ricotta and almond filling with a hint of lemon.

Sfogliatella date back to 17th century Italy and the province of Salerno, where they were made at the Santa Rosa monastery.

An enterprising Naples chef “acquired” the recipe and they became a best seller by 1818, and are now found all over Italy.

A particularly fine pot of earl grey tea ($5.50) was the perfect accompaniment in my estimation.

The coffee lovers around me reckoned Fiorentina’s caffe was deliziosa, and so was the mini cannoli ($2.50) I took home for dinner.