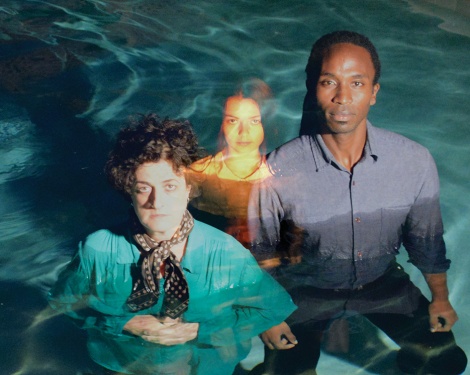 TALKBACK is a dark and intense play about a fraudulent psychic who discovers she might not be such a fraud after all.

The Yokine local was hooked on script writing whilst completing an English and cultural studies degree at UWA.

Talkback was initially written as a short five-minute piece for a creative writing workshop at Barking Gecko.

“I was trying to think of a back premise that would grab attention, and was not something you would usually see on stage,” Cockroft says.

With the assistance of dramaturg Jackson Used, the play was rewritten as a 55-minute piece.

It’s set in a radio studio, with moody lighting and disembodied voices, including the troubled Dawn (Verity Jansen), who is looking for answers about her untimely death.

“She’s a 12-year-old ghost who has had her own troubles to deal with, in her past life and her afterlife,” Cockroft says.

The station’s psychic Margie (Monica Main) has been fooling audiences with her faked abilities for years, but she’s fallen out of favour and been relegated to the graveyard shift.

Desperate for ratings, she’s scraping the bottom of the barrel just to keep her job.

Then one night memories start knocking and Margie might be closer to the dead than she thinks.

Elise Wilson directs the thought-provoking play, while Isaac Diamond provides the dark and morphing sound to create a crucial counterpoint to the paranormal themes.

Talkback is on January 28 to February 1, at the Blue Room Theatre, James Street, Northbridge.