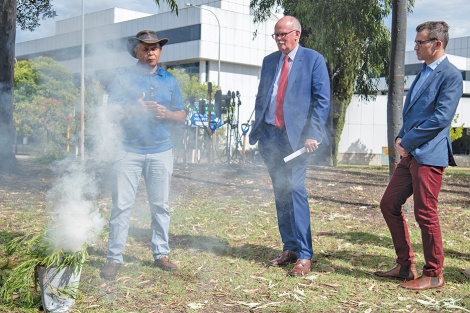 WELLINGTON SQUARE will get a new Noongar dual name as part of a fast-tracked upgrade.

When Perth council’s commissioners first endorsed a design in September 2018 the $18.7million works were to be staged over six years and include extensive consultation.

But in December commissioners approved a slimmed-down plan that made savings by deferring upgrades to Wittenoom Street.  At the same time they approved a tender from Densford Civil which said it could do the major portion of the works (landscaping, civil works and electrical) within a year.

On Tuesday this week Noongar elder Nick Abraham held a smoking ceremony at the park, joining Perth Labor MP John Carey and council commissioner Andrew Hammond to turn the first sod and announce the McGowan government was tipping in $4.37m.

The new square will feature an intergenerational playground, a Stolen Generation place of reflection, basketball courts and new automated ablution facilities, along with more paths and native trees. The park will get new furniture, wifi, lighting and CCTV.

“Both the park and playground will receive dual names in recognition of Wellington Square’s significance to many members of the Aboriginal community, and out of respect for the traditional owners and custodians of the land,”  Commr Hammond said.

Names will be finalised in the coming months.

The city’s been consulting with Noongar man Jim Morrison’s group Yokai (which was formed by the Bringing Them Home Committee and the WA Stolen Generations Alliance) on the Stolen Generation tribute, with the tender due to be awarded in March.

Mr Carey says he’s “over the moon” seeing the job get done quicker than originally scheduled.

“Wellington Square has been either a dead space or a trouble spot, we can’t be shy of that, and what we know is if we make a place more people-friendly and attract more people it becomes safer, a more vibrant place and better for the community.

“Residents have been exasperated: I’ve had a lot contact me asking where the project’s at. The commissioners and the new administration should be congratulated because it was [originally] going to be done over a long period off time. This is the missing picture, we don’t need more Yagan Squares and Elizabeth Quays.

“What we need is recreational facilities, playgrounds, dog parks, seniors facilities, so we cater for people of all ages and make it an attractive place to live.”