FEMALE footy players will get their own change rooms for the first time at Leederville Oval for the February 29 AFLW match between the Eagles and the Western Bulldogs.

For decades a lack of suitable change room and toilet facilities at traditionally “male” sports venues has been one of the sticking points hindering the uptake of women in sports.

But Vincent council has just finished a $140,000 upgrade at Leederville Oval for new shower cubicles and toilets to accommodate female teams, with Subiaco and East Perth football clubs each kicking in $10,000.

Gone are the days when footy was considered a men’s game and the change rooms only had to cater for males,” Vincent mayor Emma Cole says. 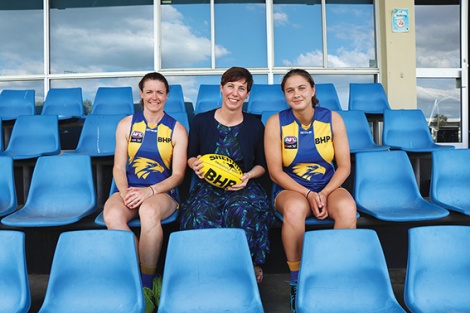 “Women’s sport is booming and we are excited to be doing what we can to encourage girls and women to get involved.

“One way of doing this is to make sure change rooms are comfortable and appropriate for females.”

The city also waived the $8000 oval hire fee for the free February 29 match.

The pro-sportswomen changes came about after a 2018 motion from deputy mayor Susan Gontaszewski who noted that many of the publicly owned sports facilities were mostly dominated by men. The city has started giving out grants to teams looking to expand female participation, with Mount Hawthorn Cardinals Junior footy club and North Perth Dynamites Netball Club both getting a $2000 boon last week.