AN eminent figure in Australian politics has thrown his support behind WA’s Rotary clubs, with WA governor Kim Beazley the new patron of District 9455.

Mr Beazley was a former deputy prime minister, Australian ambassador to the US, and held numerous portfolios as a federal minister, most notably defence where he earned the sobriquet “Bomber Beazley”.

On February 20 Mr Beazley gave a speech to members from the clubs about the increasing importance of volunteering. 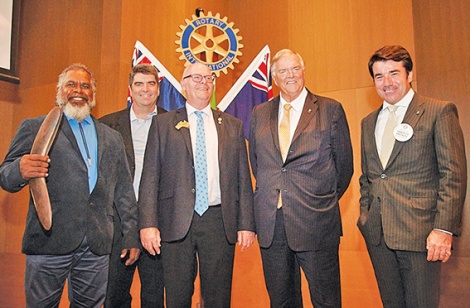 Mr Beazley said economic indicators suggested western countries might soon struggle to provide the same level of support to their citizens without help from volunteers.

Perth Rotary president Vangelis Katsaitis said having the governor as patron was a strong motivator for their work.

“The amazing work Rotary does for those communities in need – here and abroad – is mind blowing,” he said.

“From helping victims of domestic violence to building houses for homeless families in Cambodia and providing shelter for Perth’s street kids are just some of the initiatives Rotary undertakes.”

Mr Katsaitas said his had benefited from having former WA Governor Ken Michael as a member.

“Having access to his wise counsel, his enthusiastic support and his amazing network of community leaders has been invaluable.

“With governor Beazley now putting his shoulder to the Rotary wheel we feel even more can be accomplished.”