THEY’VE toured with AC/DC and been nominated for an ARIA, but Kingswood lead guitarist Alex Laska still lives with his mother.

“I’ve dedicated all my money into this band and experiencing success, it’s really tough.

“I don’t have a second job at the moment, but if any cash work pops up I’ll grab it.”

But Laska says his love of rock ‘n’ roll is undiminished and he can’t wait to get back out on the road with the band next month.

The Melbourne rockers have a new album out, Juveniles, and will be playing The Rosemount Hotel in Perth on March 27 as part of a 20-date Australian tour.

“Our new album has taken about two and a half years, but you could say it’s taken 10,” Laska says.

“We canned two completed albums to get to this one.

The band formed in 2009 and called themselves Kingswood because they had all been conceived in a Holden Kingswood.

They had all known each other from school or university, but more recently the band’s lighting technician Braiden Michetti became their new bassist. 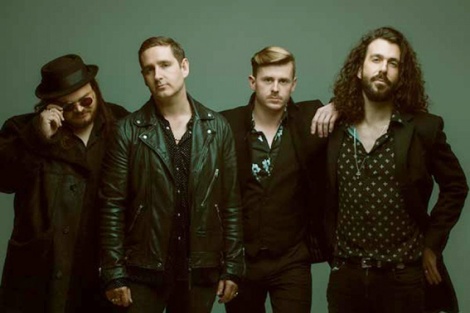 “Braiden used to work for the band, then we discovered he was a kick-ass bass player”.

Laska says he is inspired by classic rock bands like AC/DC and Led Zeppelin.

“The Beatles are the greatest band of all time; the way they produced, their creativity and experimentation is like no other”.

The guitarist says the band is looking forward to playing in Western Australia.

“I love Perth, it’s so beautiful. We’ve been to WA heaps of times.”

If you like honest, hard-hitting rock ‘n’ roll then check out Kingswood at The Rosemount Hotel on March 27.