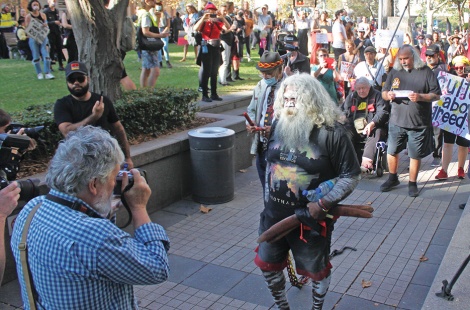 Elder Herbert Bropho leads hundreds of protestors to Rio Tinto’s Perth office on June 9, were they were held away from the entrance by scores of police. Photos by David Bell.

A BROAD union of Aboriginal elders has called for a moratorium on mining in WA to allow UNESCO to step in and protect Indigenous heritage sites.

It was sparked by the mining company’s destruction of the Juukan Gorge caves in the state’s north that had been used by Aboriginal people as many as 46,000 years ago. The expansion of Rio’s Brockman 4 mine came despite objections from the Puutu Kunti Kurrama and Pinikura Aboriginal Corporations.

The elders say it shows the WA government can’t be trusted to manage its own heritage sites.

“They came like a thief in the night,” Mr Eggington said. “They have torn our hearts out.”

Artifacts found in the caves included stone and bone tools and an extremely rare example of ancient braided hair.

Mr Eggington read a letter of demands at the rally, including a demand that “all mining activity within WA must cease immediately until significant Aboriginal cultural and historical sites are fully protected by being listed on the UNESCO world heritage sites list, to protect what little significant sites remain”.

The blast had state government approval under the WA Aboriginal Heritage Act, which doesn’t allow traditional owners a right of appeal.

Mr Eggington said “it is clear like looking through water” that the act is insufficient.

Aboriginal affairs minister Ben Wyatt has said the act is being reviewed to toughen it up, but the elders’ letter said that’s not enough.

“Even with proposed changes to the act, we believe it will still not be enough to prevent further loss to significant material at these sites, as it has always been the case that mining interests are prioritised over Aboriginal cultural heritage issues.”

Rio Tinto has offered up an apology saying there was a “misunderstanding” over how significant the site was.

Mr Eggington said the region’s people had made it clear, even going on record talking about how important the site was for a documentary Rio Tinto funded.

Hours after the protest Reconciliation Australia announced it had revoked endorsement of Rio Tinto.

RA works with organisations to develop “reconciliation action plans” to mend relationships with Aboriginal people, but it said Rio Tinto’s actions were “a breathtaking breach of a respectful relationship.

“It was devastating for the traditional owners and robbed the world of a uniquely valuable heritage site. The pain caused by this action extend to First Peoples and their allies across Australia and around the world.