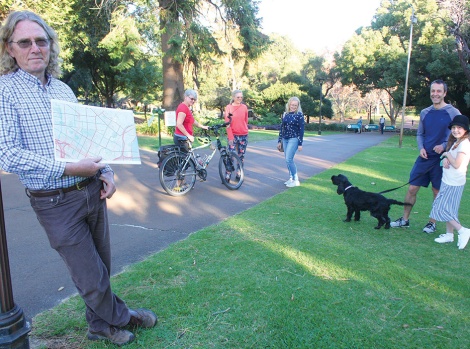 While they don’t love the idea of a Hyde Park bike path, these locals are more miffed they didn’t get a say on the new cycle routes: Dudley Maier, Geraldine Box, Sally Lake, Melina Quinlan, Dusty the dog, and Isla and Andrew Main. Photo by David Bell

A CYCLE route dissecting Hyde Park is among some questionable paths in a new WA government bike plan.

The WA Department of Transport’s draft Long Term Cycle Network for Perth and Peel up for endorsement by Vincent council next week.

While some councils have asked for input from their residents, Vincent councillors are scheduled to vote on June 16 without going out to consultation.

The network is only “aspirational”, but only routes identified in the plan will be eligible for future state government funding.

North Perth resident Andrew Main was unhappy not to get a say.

“I know the DoT has developed the plan, but there’s been liaising and negotiations between the city and the department so it would have been helpful, I think, for residents to be involved in that somehow,” Mr Main said.

“I don’t think the plan is ideal; there’s areas for improvement.”

The Hyde Park route is a strange addition to anyone familiar with the area and century-long attempts to prevent it being a thoroughfare.

Highgate resident Sally Lake, a former councillor, recalls back in her day the council installed barriers on the existing footpath specifically to slow down cyclists.

She says about a century earlier there was similar discontent when the lake was split in half to allow a road through; after a protest the plan was shelved and a walkway put through instead.

Vincent staff noted in a report to councillors that DoT developed the plan “in-house with little consultation with local governments” due to time constraints.

They had even told DoT a year ago some of the routes were “unlikely to be possible/supported”, while Stirling council’s warning about a proposed Walcott Street route was ignored and it made it to the final draft of the LTCN.

Former councillor Dudley Maier says council staff are quite right to bristle at the Hyde Park route “but they haven’t done anything effectively to address it, like bring it to council in a timely manner or consult the community”.

He says other councils have found time to squeeze in some consultation, with the Town of Cottesloe undertaking an extensive public comment process in August last year.

Vincent CEO David MacLennan says DoT only sent the final draft on May 21, with a deadline for endorsement by the end of June.

Mayor Emma Cole has asked staff to find out if there’s any chance to wiggle the deadline and fit in community consultation.

She says the council has its own bike plan from 2013, and is currently working on a new integrated transport plan covering cars, parking, bikes and walking. If there’s no time for a new round of public comment, they’ll fall back on the consultation from those two plans.

“I’d like to see that [the LTCN] aligns with these documents, and that our community does have an opportunity to have a say,” Ms Cole says.

Cr Josh Topelberg said he’d like to know if anyone local actually had an “aspiration” to have a cycle route through Hyde Park, and said they should not endorse the plan unless that’s scrubbed out.