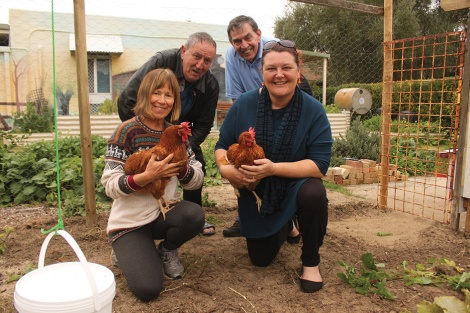 CHICKENS have come back to roost at Roxy Lane Community Garden in Maylands, after they were temporarily re-homed due to an anonymous complaint.

A few months ago someone complained to the council that the chicken enclosure touched the side of the garden’s property, while the city’s chicken-keeping rules require the enclosure to be free-standing.

The rule is mainly intended to keep hens away from neighbours, but still applied even though the Roxy Lane enclosure was up against a laneway and opposite a carpark. It had to be taken down.

She says it was a shame to have to take down the original enclosure since kids walking down the laneway loved to interact with the chickens through the fence and they were a good advertisement to bring in new members.

The chooks were re-homed and spent a few months with RLCG chair Marie Tatham. Members scrounged around for odds and ends to rebuild the chicken hutch, trying to keep costs low and minimise trips to the hardware store for new materials.

This week the door was installed and the chickens have a new compliant enclosure and new hutch to roost in. Members are calling it the “Chicken Hilton”.

We can’t guarantee these three are the same chickens who’d lived there, since they got mixed in with some other very similar looking hens at one of the stages of their foster care journey. But they seemed right at home within minutes of arriving, having a great time destroying the overgrown winter plants in their enclosure.

After a Covid-related break, the garden’s open days are back on every second Saturday (9am to 11ish) and they’re keen for new members. Events are announced at “Roxy Lane Community Garden” Facebook page. 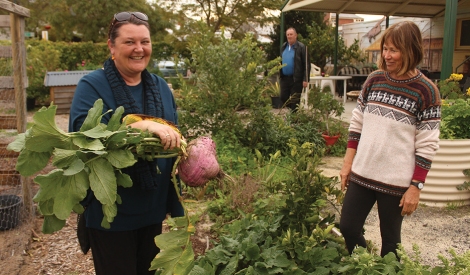 A radish to relish

THIS Voice reporter has somehow never done a “big vegetable” story, but luckily was in the right spot to pick one up while meeting the chickens when Catherine Ehrhardt noticed a monster radish emerging among the borage leaves.

Usually veggies get picked on open days for members to divide up and take what they need. But the garden’s been quiet during Covid restrictions, with member Rodney Clifford spending most of his week down there to keep an eye on things.

The downtime let this radish grow to a prodigious size. There were no scales on site but it felt like this giant weighed around 3kg.