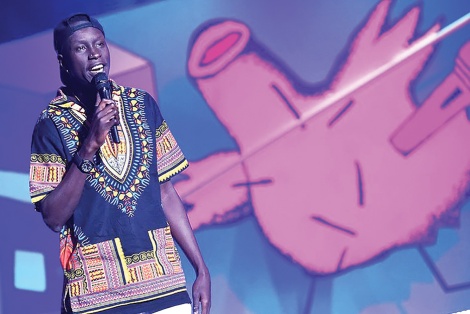 FROM the refugee camps of Ethiopia to the burbs of northern Perth, comedy sensation Emo has seen his fair share of horror – but now he’s making people laugh.

Since bursting onto the Perth stand-up circuit in 2016, Emo has made a name for himself as one of the sharpest and funniest comics around.

But behind the jokes and smiles is a tale of civil war and hardship.

“My parents fled Sudan and settled in a refugee camp in Ethiopia where I was born shortly after in 1988,” Emo says.

“We stayed there for four years before a conflict broke out and we would have to flee yet another country to where we would settle in a refugee camp in Kenya.”

Emo says life in the refugee camp was brutal, to the point where a strange normality emerged.

“Losing loved ones along the way, not knowing when the next war or conflict is going to happen…It all became the normal, so not sure it became traumatic,” he says.

“The rigid divisions (called groups) of the refugee camp were more fenced-off areas – a giant cage you were free to move in and around from.

“They weren’t very secure and safe, so many tribal conflicts broke out in our time there.

“In 1996 we got sponsored to come to Australia and we were giving a second chance in life.”

“My past really built character; I could have gone either way but from them past experiences I now know there is not much that is too big or too hard if I set my mind to it. I’ve been working since I was 14 and luckily I found and really love comedy, so my work drive is the reflection of my seriousness for that art form.”

Inspired by comedy giants like Eddie Murphy, Chris Rock and Dave Chappelle, Emo is a natural storyteller who turns his life into a hilarious odyssey. During his live show he touches on his experiences as a refugee, being a migrant in a “white” school in the northern suburbs of Perth in the 1990s, and more recently the ups and downs of being a dad, in a show that is both funny and socially relevant.

“I always hope people walk away with something from my shows, walk away happier, smarter, kinder, anything,” Emo says.

“I don’t spread hate, its informative stories, opinion or personal experience. I am 32 years old, so my glass is still half full…”

Emo will headline a night of laughs and entertainment at the Heath Ledger Theatre on Saturday (October 31).

Offering some light relief during the pandemic, Can We Laugh Again? will feature a star-studded lineup of local and international comedians including MC Jon Pinder, Jason Wood, Simone Springe, Chief Kosse and some surprise special guests.