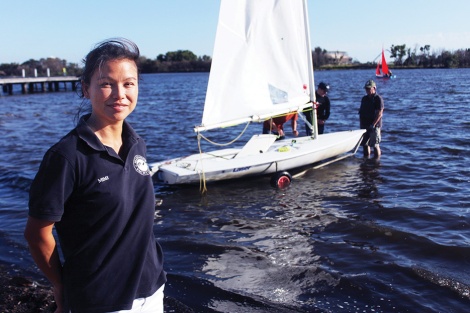 A NEW plan to let waterskiers and jet skis into more of the Swan River has led to a flow of concerns for sensitive shorelines being eroded and hoons encroaching onto quiet yachting waters.

The WA Department of Transport is currently testing the waters on redrawn boundaries that’d extend the Belmont water ski area 100m upstream and 145m downstream,  with the latter eating into the area currently used by Maylands Yacht Club.

Club president Mimi Secco says “we gave up quite a lot of space to the water skiers about a decade ago” to keep the peace and they’re reluctant to cede more water. The new water ski zone engulfs one of their racing markers, and because they come in pairs that’d mean two have to move.

“It’d shorten our course and there’s no compensation at the other end.” The other end is marked by Windan Bridge and they can’t hold races under that.

The club’s already facing an uncertain future because of multiple large apartment blocks going up on Belmont Park opposite them, with 4,500 new apartments across several towers. A new public jetty on that side of the shore is also proposed.

“That development could create an existential crisis for the club,” Ms Secco says. “That’s going to have a massive impact on the wind, we’re going to have to adapt and do whatever it takes.”

The club’s been host to state titles but it could be trickier to attract them with the shortened course and unpredictable changes to the wind from the apartments.

“Having less water to work with makes it even harder for the club to survive,” Ms Secco says.

From the other direction, the changes would also allow jet skis into the yachting part of the river. Jet skis are currently forbidden from going upstream of Windan Bridge.

Sometimes a rogue jet skier ignores that rule and hoons through anyway, disrupting a quiet day’s sailing with froth and wake. The jet skiers will still have to stick to the regular river speed limit (5 knots, or 8 knots in the yachting zone) but even as it stands policing is rare.

Letting jet skis access more of the river has also prompted environmental concerns from the wake’s potential to erode the shore.

Friends of Maylands Samphires takes care of the riverfront around Clarkson Reserve, removing invasive species to let the native samphires and saltbushes regrow (the salt-tolerant plants filter out pollutants and are habitat for birds).

FoMS member Jo Bower says letting jet skis upstream “would have significant impact on the fragile riverside ecology and disturb the quiet recreation pleasures of thousands of residents and visitors to riverside parks.

“The proposal would undermine the significant riverside conservation work along the river by councils and local Friends groups over many years.

“In Maylands… there is an area of saltmarsh which is classified as a ‘threatened ecological community’ and is an important bird breeding site.”

The proposal would run for a two-year trial and the DoT runs these river-use reviews every four or five years. The DoT says the expanded boundary aims “to improve safety of water ski activities”.

Consultation is via mysaytransport.wa.gov.au (Swan River upper reaches aquatic review) and has been extended to November 13.