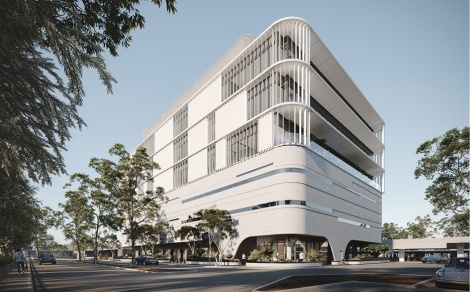 DESIGNS for a hefty high-tech addition to the East Perth train station site have been released for public comment.

Plans describe the new building as “an essential infrastructure project that will form the nerve centre of Perth’s rails system” by 2023, running the high capacity signalling needed for Metronet that allows trains to run closer together. The current system’s nearing obsolescence and requires big gaps between trains for safety because it just senses which fixed “block” of track a train is in, while the new system will precisely track their location and speed.

The design of the heritage-listed 1976 building, ugly but beloved, will influence the new one. The brown building’s arrow-slit windows were designed to keep out the harsh western sun, and the new building will have similar but “finer and softer” angled screens. In contrast to the hard angles of the old building, the new building’s rounded edges are “inspired by historical rail designs” and meant to reference the round front of an old steam engine.

Because of the hefty price tag the decision to approve will be made by the state-government led Development Assessment Panel instead of the council.

Just over 60 public car bays will go to make way for the new building, a significant hit given they’re currently almost all utilised according to the plans. There’ll also be a very slight shortage of staff parking bays under Vincent council rules, but because it’s classified as “public works” and on a crown reserve those rules don’t apply (and the designers reckon it’ll be easy to get to by train, since it’s at a train station).

While the council will be bypassed the design did get a decent review from the Office of the Government Architect, in contrast to the OGA’s scathing assessment of the PTA’s other big project recently, the Bayswater train station redevelopment.

For this one the OGA’s pretty happy, giving a rubber stamp of support in 7 out of 10 categories with “pending” marks for the other three. The OGA wants small improvements to landscaping, details on the public art to be installed on site, and also wants a better sustainability rating (it says the planned four star rating is “inadequate for a government building of this significance” and they should really hit five).

Full plans are up for comment at imagine.vincent.wa.gov.au until February 9, with the DAP likely to decide on it in March.