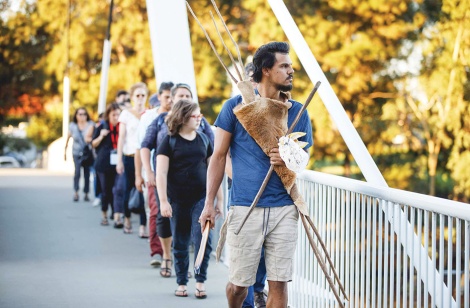 • Writer and performer Ian Wilkes leads his audience around Lake Monger, site of the first major conflict between traditional owners and colonialists. Photo by Dan Grant

FOLLOWING a sell-out Perth Festival oral history performance exploring a massacre of Whadjuk Noongars at Galup (Lake Monger), elders are calling for a memorial at the site and the story to be told in schools.

Galup, the Noongar name for the area and the title of the performance, explored the story of a disputed massacre as it was passed down through generations of local indigenous people.

“I’d heard there was a massacre there that got swept under the rug,” writer and performer Ian Wilkes said last year as Galup was being prepared. “When we were driving past on the freeway there, dad would point out at the lake and say ‘remember there was a massacre at that lake, boys’.”

Mr Wilkes teamed up with writer, director and producer Poppy van Oorde-Grainger, and they searched archives and sought out the stories of ‘Birdiya’, the elders.

They were pointed to Doolann Leisha Eatts, who’d been waiting most of her life to tell the story.

“My grandmother told me when I was a little girl, many years ago, about Lake Monger, about Gallup.”

Ms Eatts said after a confrontation nearby, the local people took refuge in Galup.

Her grandmother told her “a lot of them died in the lake.

“And she thinks some of them got away… she was hoping maybe, that they moved from Lake Monger.”

A London journal published seven months after the event, quoting “Indian newspapers”, puts the date as May 1830, and the perpetrators led by Major Frederick Irwin. Irwin, later made acting governor of WA, claimed there was no one killed, but the journal numbers seven deaths.

Mr Wilkes ended every performance during the Perth Festival telling the audience “just because something bad happened here doesn’t make it a bad place”.

Galup was a significant site for ages before the colonists came. It was a meeting site, and a resting place for the Wagyl. Even after the arrival, there were happy times there: It was the site of an early spearthrowing contest between Whadjuk man Yagan and an Aboriginal man from Albany, Gyallipert, brought up on a colonial ship. The two couldn’t speak each others’ languages, but were fast friends and competitors (Yagan won the contest, hitting the target of a narrow walking stick at about 25 paces). The lakeside was also the first place a Yonga, a kangaroo dance, was done while accompanied by piano.

With the festival over, the four Noongar Birdiya consultants – Ms Eatts, Liz Hayden, Darryl Kickett and Ted Wilkes – want to see a lasting impact, and want the public to understand how the violence of settler colonisation still affects Australia.

Galup’s team are now seeking to embed the history in the curriculum in local schools, they’re advocating for a memorial at the lake, and later this year the performance will be adapted for virtual reality.

Ted Wilkes, father of Ian, said last year in the planning stages: “If this is the way of the future, and getting information out to people, I want to be a part of it.”

Ms Eatts is glad the story will live on. “We’ve got a lot of lovely young people who are strong, coming out, and I’m so proud to see them.

“They’re getting strong in our culture, they want to know our language and our culture.

“That’s a good thing, because we’ve got to keep it going,” Ms Eatts said.