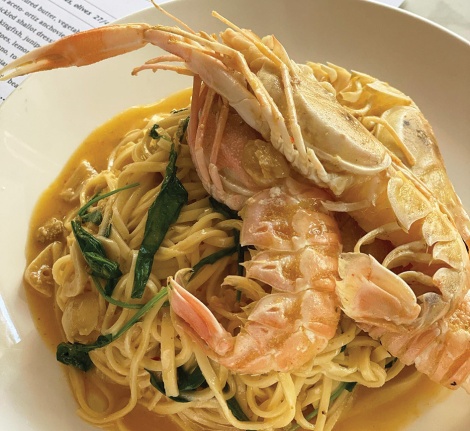 MY night out at Lulu La Delizia in Subiaco began at 9pm, so we were off to a very European start.

With my sophisticated French friend Lily in tow, in a pair of silk trousers no less, I could almost smell the hills of Tuscany where I once spent a very wet spring working on a vineyard (which is not as elegant as, and oddly much bloodier than, it sounds).

Unlike the streets of Firenze, those of Subiaco at 9pm are abbandonato, but when we rounded the corner into the little alleyway inhabited by Lulu, we found warmth, cheer and revelry among the clientele of the small pasta-focused venue.

With dark wood and white lace trimmings throughout, the restaurant demonstrates simplicity and attention to detail, which in combination I’ve found bodes well for a meal.

Our server, Lachie, had an impressive amount of knowledge about the wine selection. I asked after a pinot, and while there was not one on the menu, Lachie poured us each a sample of his recommended nebbiolo, a wine he described as belonging firmly to the New World category, with its fruity and playful character.

Call me stuck in the past, but my heart will always belong to the stodgy Old World stalwarts. We both ordered a Negroni cocktail (one part gin, one part vermouth rosso and one part Campari, garnished with orange peel $15), a decision I’ve never yet regretted.

We started off with the saffron spaghetti with clams and spigarello ($33). The pasta was cooked perfectly al dente, the clams tasted fresh off the boat, and the sauce was decadent in every way a sauce should be decadent. Italian cooking, we agreed, would be nothing without butter. Lots and lots of butter.

For a second course, we tried the corzetti genovese ($34), a flat disk-shaped pasta with a pesto-style sauce. While everything was clearly prepared by competent hands, we felt it lacked the special oomph that would keep us coming back for the saffron spaghetti.

Portions were modest but not small, and at the end of the night we were both quite satisfied, having enjoyed well-prepared Italian classics in a cosy venue with friendly and attentive staff.