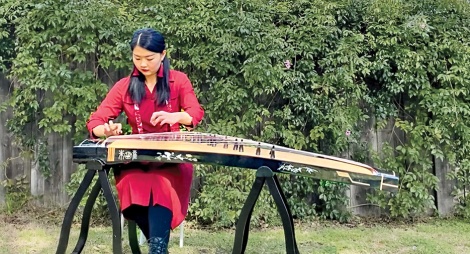 Shutong Liu is in WA to complete her PhD in plant biology, but like many other new faces around town has brought with her prodigious musical talent. Early next month she’ll be giving Mt Lawley a taste of her 21-string ghuzeng at a World Music Cafe – the organisation tasked with helping to promote Australia’s multicultural cred worldwide.

A SOCIAL enterprise  given the task of helping restore Australia’s international reputation as a tolerant and diverse mob is heading to Mt Lawley early next month to give locals a taste of WA’s multicultural talent.

World Music Cafe is run through Multicultural Futures (formerly the Fremantle Multicultural Centre) and showcases the depth of talent in WA’s migrant and refugee community, many of whom were stars back home but struggle to reboot their careers in an unfamiliar culture.

The performances also come with a twist; part of the deal is giving migrants the opportunity to learn business catering skills, so there’s always a sit-down meal with an international flavour.

WMC was the brainchild of Jon Cope, who used to run WA’s premier multicultural d Kulcha until it succumbed to the costs of maintaining a heritage building.

Mr Cope says being able to take the talent to the community rather than the other way round has been a recipe for success since he launched WMC in 2019. So much so the organisation recently scored a grant from the Department of Foreign Affairs and Trade to produce a series of short films about its concerts which will be screened in regions Australia hopes to do business with in the future, including southern Africa and South-East Asia.

Mr Cope says despite the Covid hiccup, last year was a great success for WMC, performing nine sell-out shows at the Camelot Theatre in Mosman Park, as well as corporate gigs.

“We started working with mentor chef Nimrod Kazoom, who is awesome and his food is extraordinary.

“It’s great to see the WMC kitchen team of mainly Arabic Lebanese women and the Israeli chef working together so well.”

WMC will be at the Mt Lawley Bowling Club on Friday February 4 for its first performance this year, featuring a pianist whose talents cross between jazz and classical and has seen him become the in-vogue salsa player in Perth despite language barriers.

Moha Builo Michel moved from Cuba last year after falling in love with Australian flautist Annalisa Powell at a Brazilian ‘roda de choro’, a gathering where people come to celebrate the local musical style known in English as “little cry”.

He had a long touring career back home as a soloist with the Santa Catarina Symphony Orchestra, but here in Australia the pair perform as the duo Novos Ares, with a latin repertoire from Cuba, Brazil and Argentina.

Also on the bill for the night is the Red Sea Pedestrians with exuberant Jewish klezmer music which can be heard from Eastern Europe to the Middle East and as far abroad as New York. The pedestrians are led by singing sisters Mel and Nikki Jones and feature Dave and Jen Hoffman on accordion and flute and Jim Elliot on bass.

to complete her PhD in plant biology at UWA, but has made a name playing the 21-string traditional Chinese zither known as the guzheng with the Chung Wah Orchestra.

Tickets for the February 3 performance (6.45pm) from worldmusiccafe.com.au/events