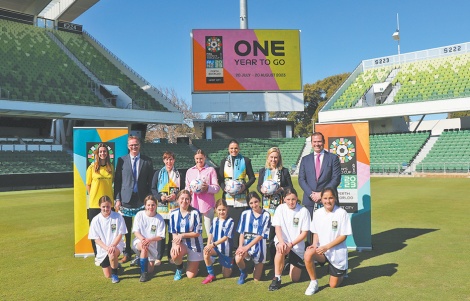 PERTH’S stadiums will soon host world class soccer with the grounds now picked to host games and training sessions for the opening of the FIFA Women’s World Cup 2023.

Perth Oval (redubbed “Perth Rectangular Stadium” whenever it’s used for soccer) has been chosen to host all Perth games next July 22, 26, 29 and August 1 and 3.

Vincent mayor Emma Cole says: “We’re lucky to be in the thick of the action when the FIFA Women’s World Cup 2023 comes to the west.

“The City of Vincent will provide a vibrant backdrop for the thousands of spectators and billions of television viewers around the world.

“The games at Perth Rectangular Stadium will be a huge drawcard for tourists and a boon for our local businesses.”

Dorrien Gardens in West Perth, home to the Perth Soccer Club, has also been chosen as a training site for the top teams.

Vincent council’s been trying to get more women and girls into sport the past few years and Ms Cole says this’ll be a big boost.

“Having a training site in Vincent will connect the grassroots with the world’s best players, inspiring the next generation of aspiring female football players in our community.”

Perth Oval/Rectangle got $35m state government funding for upgrades and work’s currently going on to bring it up to scratch to meet FIFA requirements for the world cup.