A LONGSTANDING ban on billboards and other third party advertising signs will remain in Vincent council’s domain.

The existing few exceptions that snuck past the keeper will gradually be phased out under a refortified policy.

Companies have tried and failed over the past 22 years to erect valuable billboards in Vincent’s relatively ad-free surrounds, lured by the lucrative opportunities of renting them out for up to $4000 a month for the small ones to tens of thousands for the biggies.

Former lord mayor Lisa Scaffidi even once made the point that “cities” have billboards, after Vincent council ordered the removal of an unauthorised billboard on one of her properties on its side of the border.

After reviewing the old policy and consulting the public the billboard ban is to stay.

“According to our vision statement in our Strategic Community Plan 2018-2028, we are a leafy, vibrant place and that doesn’t come through a proliferation of large billboard advertising.

“We want Vincent to continue to be a unique inner city area, known for our interesting shopfronts, open windows, public art, leafy streets and alfresco lifestyle.

“With increasing applications for billboards, and the move towards large format digital advertising, it was time to check in with our community.

“With this support, we are effectively saying that we will see the phasing out of temporary billboards and maintain our position of no new billboards in Vincent.”

The few billboards in Vincent are mostly there because they were approved by the old Perth council before Vincent came into existence in 1994, and Vincent’s powerless to undo those approvals. 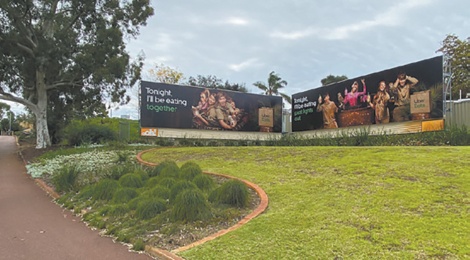 THE phase-out of Vincent’s billboards is causing financial woes for a retiree relying on the regular income from signs at the corner of Loftus and Newcastle Streets (right).

In 2004 Graham Cerini got a rare exception from Vincent council to put up billboards on his narrow block since it was a tricky spot to develop and construction trucks would have trouble accessing it. Instead of having it left as an empty dirt lot, the council of the day struck a bargain that Mr Cerini could put up signs if he turned the lot into a park.

It’s been a rolling agreement and the current 10-year deal expires in 2028, and the council’s decided there’ll be no more further extensions.

“My dad is a self-funded retiree. He’s 83 years old. He is not a billboard company. He does not have superannuation,” Ms Cerini said.

Mr Cerini’s case for approval in perpetuity is at the SAT with a hearing scheduled  September 1.