THE old Methodist Manse on Newcastle Street will live to see another Christmas after the local development assessment panel rejected a request to demolish it.

Owners J and R Baker wanted to knock it over to make way for an eight-storey office and units development. The application was a fair way’s north of allowed limits and the setback was too tiny so the DAP knocked it on the head.

Alf Parolo from the Cleaver Precinct group explains his members are worried about the rapid rate of change to their once-quiet residential area.

It’s still largely one-storey houses at that end of the street but new changes to the town planning scheme have developers salivating at the prospect of knocking over old buildings to build big, profitable towers. Vincent’s once-maligned planning section earned a thumbs-up from the precinct, with Mr Parolo praising manager Petar Mrdja for a solid job in recommending rejection. 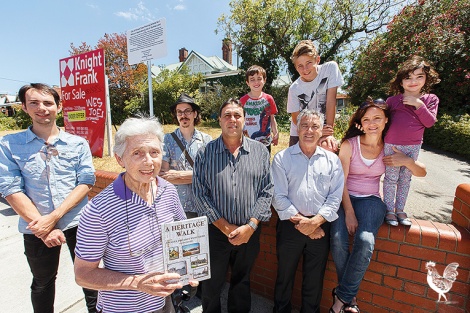 It’s a temporary win for the group: given the money to be made on every square metre, it expects to see a slightly revised application emerge down the track.

Built in the 1890s, the Methodist Manse was home to the reverends of the Wesleyan Church on Charles Street.

It was in line to be heritage listed during Nick Catania’s days as mayor, with council staff saying it was a rare building because the usual decorations seen in federation bungalows were deliberately plain to suit the austerity ethos of the church.

Despite staff reports about the building being rare, in good nick, and having a rich history, the council voted not to list it—not that municipal lists are worth a cracker when it comes to appeals to the state administrative tribunal, which will have ultimate authority over any future application.